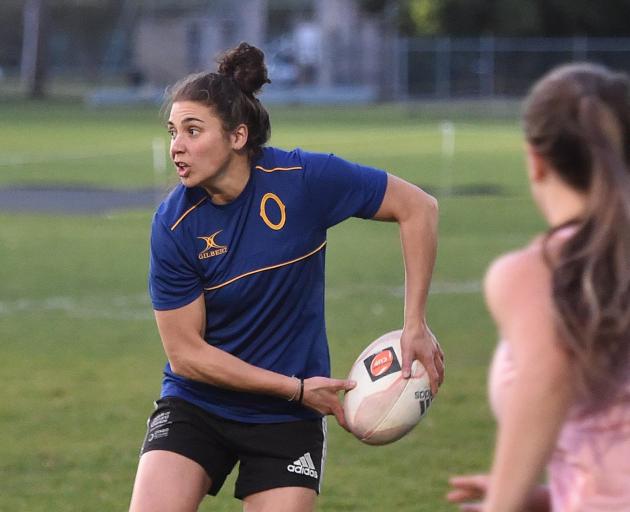 Otago fullback Sheree Hume passes the ball at training. PHOTO: GREGOR RICHARDSON
This is the final hurdle to be cleared; the prize after all that hard grind.

After an unbeaten season and some thrilling play, it all goes on the line for the Otago Spirit tomorrow.

The side will host the Hawke's Bay Tui in the Farah Palmer Cup championship final at Forsyth Barr Stadium.

Otago has been the pace-setter in the championship all year, winning every game and then beating Tasman in the semifinal last week 64-10.

So to trip up at the final would be very disappointing.

Otago Spirit coach Scott Manson said the side had not done anything different this week to get ready for the final.

Some bigger players had been brought in for practice on Tuesday as the Hawke's Bay team has some size up front and liked to carry the ball through its forwards.

Otago differs from most teams these days. It throws the ball around and likes to get it wide where it has some speed - none of this crash-and-bash stuff.

"We've been moving it round all season, so there is no reason to change that. We want to run teams round and get them running around the field," Manson said.

"We have to trust our skill set and it is something we have done all year.

"Playing under the roof will help us.

"They have got some good players in key areas so we need to shut them down."

Otago has one of the smaller forward packs in the competition but what it lacks in size it makes up in fight.

The Otago set piece was solid and the forwards have held their own against some far bigger packs.

The home team did not want to get drawn into a physical battle as that was not where it had any advantages.

Manson said the Spirit forward pack was not big but it was skilful and athletic. A lot of hard work had gone into the season with training starting back in February

The Otago team has played in the past two finals so will be looking to make it third time lucky. The other two finals have been away so to play at home was a real bonus.

Manson is in no doubt of the benefits of winning tomorrow.

"I think we need to go up [to the premiership division]. The fact is there has been no crossover games this year between the championship and premiership teams.

"There is always that concern a couple of championship teams are going to struggle. But we need these games, need to push ourselves. To be up there in the premiership would be more of a challenge, for sure."

Otago beat Hawke's Bay in the round-robin match 34-26 in Napier with Ferguson, a former Hawke's Bay player, coming on to score a couple of match-winning tries at the end.