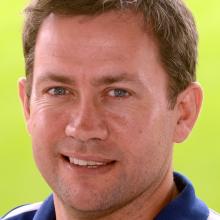 Cory Brown
This is defence against attack.

Otago will have to have its tackling boots on when it plays Mitre 10 Cup Championship leader Wellington in the capital tomorrow.

Otago coach Cory Brown said it should be an intriguing contest as the two sides brought contrasting talents to the table.

"So if we can stop them then we can get among them and look to turn the ball over.  It has the potential to be a great match."

That may be so but Otago is down some artillery and has lost some key players.

Hooker and captain Sam Anderson-Heather is out as he struggles with a sore quad after he took a knock  during the game against Northland. Sekonaia Pole will start again and youngster Ricky Jackson will make his first-class debut if he gets on.

Flanker James Lentjes is out for six months because of a shoulder injury while Dillon Hunt is not quite right after missing the past two weeks because of concussion.

Rangy lock Josh Furno goes to the blindside flank, Adam Knight is the openside flanker while Mika Mafi will start at No8. Blair Tweed gets a start at lock. Sione Teu picked up a shoulder injury in the game against Northland and could miss two to four weeks. Harbour lock Joke Koroi comes on to the bench to cover the second row.

In the backs, Tei Walden and Sio Tomkinson come back into the midfield. Fletcher Smith moves to fullback and Josh Ioane returns to first five-eighth. Halfback Josh Renton moves to the bench, replaced by Jono Ruru.

Hayden Parker is once again in the reserves after playing for 25 minutes in his first hit-out for more than a year against Northland on Wednesday.

The team had Thursday off and visited the treaty grounds at Waitangi. Brown said it was a great time for the team as it was given an official welcome. Walden, who is fluent in Maori, replied for the team.He said the visit was really enjoyable for the whole side.

It had travelled to Wellington yesterday and trained in the afternoon in wet and windy conditions.

The team was not getting too hung up on having to play its second game within four days.

"The guys are looking forward to the game. Embracing the challenge of having to play a game so soon after the last one. It is not being viewed as a negative."

Otago will have to watch its discipline after two yellow cards against Northland and has spoken about needing to keep its offside line in good shape.

Wellington can break out at any time. It sniffs opportunities all over the paddock and has plenty of game breakers. On the other hand, it can all go out the window if things starting going wrong.

If Wellington wins this game it will qualify for the playoffs and is 13 points ahead of second placed Otago.

Livewire hooker Asafo Aumua will start from the bench while Thomas Umaga-Jensen, who was signed by Otago last year only to return to Wellington this season, will start at centre for the home team.

Rain and wind is expected in the capital tomorrow.