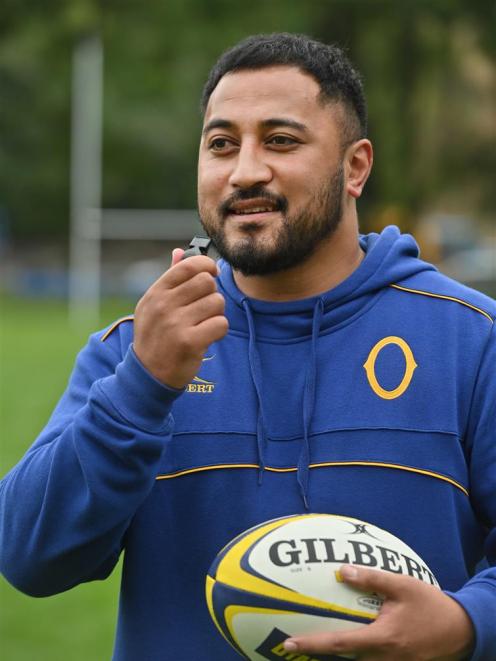 Tumua Ioane is the new referee education officer for the Otago Rugby Football Union and is out looking for referees. Photo: Linda Robertson
He has been on both sides of the game but Tumua Ioane is now the man with the whistle.

He takes over from James Doleman who has moved into the professional refereeing ranks.

Ioane has been involved in the game all his life. He started as a child and eventually rose to play about 130 games for the Dunedin club at premier level.

He then decided to go in a different direction and took up refereeing, wanting to have a new part in the game.

He officiated for two seasons and was the man in the middle for some premier games.

Over the past couple of seasons, he has moved into the coaching ranks and last season coached the Dunedin premier colts side to the title. He also helped coach the Otago sevens team at the end of last year.

Now though he has moved back into the refereeing ranks and his job is to try to retain as many referees as possible and also recruit more.

With many students arriving for tertiary education in the city this week, he is actively trying to encourage people new to the city to consider refereeing.

The aim was to have an 80% retention of referees from last year which was above the national average, he said.

Help was always needed to attract more referees and he wanted to move around secondary schools and get some of those keen to have a go into the role.

Central Otago was a place with expanding playing numbers in some areas and so that meant referees were needed. Bringing diversity to referees was also a goal.

Having played the game to premier club level and also refereed to a good level, he said they were both tough jobs.

‘‘They’re both challenging. I always thought I was a referee when I was playing anyway,‘‘ he said.

There were many misconceptions concerning refereeing and it was a job which needed plenty of time and work but was very worthwhile.

He said anyone keen to referee or get involved should be in contact at referee@orfu.co.nz