Otago to be bolstered by return of All Blacks

Josh Ioane could make a return to the Otago side for Thursday's game against Hawke's Bay. Photo: Getty Images
Otago will be bolstered by its two members of the All Black squad this week.

Both hooker Liam Coltman and first five-eighth Josh Ioane will be available to play against Hawke's Bay on Thursday.

The pair will surely start, Ioane replacing Vilimoni Koroi, and Coltman coming in for Sekonaia Pole.

Ioane has not yet been given his All Black debut, so will be chomping at the bit to play, while Coltman has not had a run since the Argentina test a month ago.

Otago rake Ricky Jackson is still in hospital with a nasty leg infection, so the hooking depth is being tested, while the same goes for the pivot spot.

Hawke's Bay will get its own cavalry, as halfback Brad Weber has been released to play Otago.

Meanwhile, Southland coach Dave Hewett said his side was not lacking spirit but as it racked up its 23rd loss in a row on Saturday, it came down to individual errors and a lack of consistency.

"Overall, we took a step back from last week. We did some good things but we put so much pressure on ourselves with different things - a dropped ball, or a poor exit ... those are the things that we need to take out of our game,'' Hewett said.

"We had the ball and we did two passes to exit when we could have done one. So we put pressure on ourselves. A lot of it was just poor individual responsibility around tackles on defence. There were some soft ones and they should have been made. There were people there to make them, the systems were working but they weren't executed.''

He said Otago had good line speed and put pressure on Southland, though he questioned the awarding of the Otago try right on halftime with Otago not having the ball at the back of the maul.

The Southland side was getting ahead of itself at times and had to play as a team.

Prop Ethan de Groot left the field with a nasty knee injury and went to hospital after the game.

Hewett said the side was remaining positive.

"The spirit is still there. If it wasn't there we wouldn't have got that try near the end. Or the try five minutes before that ... but what we need to do is reward the spirit with a win. We are trying. How do we put it all together? That is an easy statement but hard actions.

"I have to be really mindful not to bollock people as they are trying really hard. But there is no reason to be pushing the panic button.'' 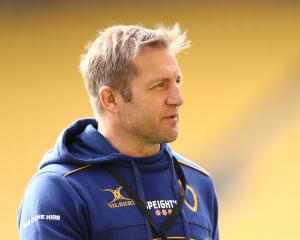