Otago cling on to Ranfurly Shield in thriller 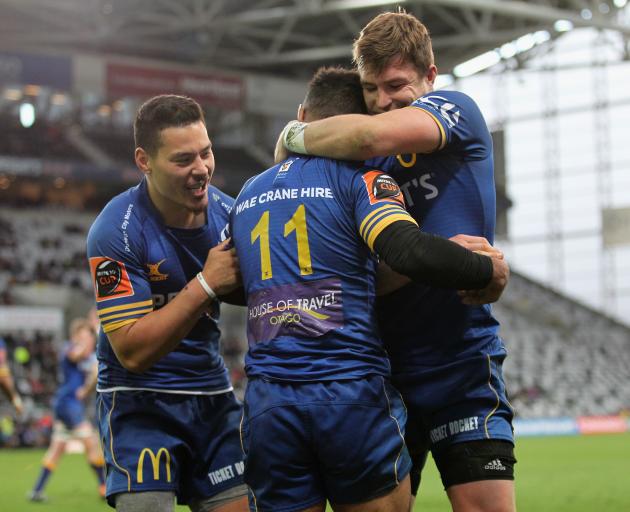 Sio Tomkinson and Michael Collins celebrate a try by Jona Nareki in an intense battle against Taranaki at Forsyth Barr Stadium. Photo: Getty Images
Otago have clung onto the Ranfurly Shield, holding off a challenge from Taranaki with a superb 35-27 victory.

Having faced substandard opposition in their last two Shield defences – beating Southland and Manawatu in relatively unconvincing wins – Otago had also lost to Hawke's Bay and Bay of Plenty to start their provincial campaign.

That left many expecting Taranaki – by far their toughest opposition so far this season – to claim a simple Shield victory, but Otago produced easily their best performance of the season to keep the Shield locked up until the end of the month.

Jona Nareki and Vilimoni Koroi were the stars of the show, scoring 30 of Otago's 35 points, including the winning contributions after Taranaki had taken the lead with 15 minutes remaining.

It was a back-and-forth game throughout, with Otago having snared the lead back before the break when Nareki went over in the corner.

Just earlier, Te Toiroa Tahuriorangi had butchered a certain try for Taranaki, knocking the ball on with the line at his mercy as he took his eyes off the pass – a mistake that would later prove crucial.

After back-to-back tries to Stephen Perofeta and Teihorangi Walden had put Taranaki in front with 15 minutes to go, the deadly duo of Koroi and Nareki won the game for Otago.

First Koroi knocked over a testing penalty to level the scores, before Nareki finished off a superb counter-attack in the left corner once again. Another Koroi penalty left Taranaki needing to score twice to win, and although they were camped on the Otago line with five minutes to go, replacement forward Josh Hill won a crucial turnover, and kept the Shield locked away until Waikato's visit in three weeks.

Wow, that is the kind of ticker that every Otago fan hopes our team will show. Cannot ask for more.