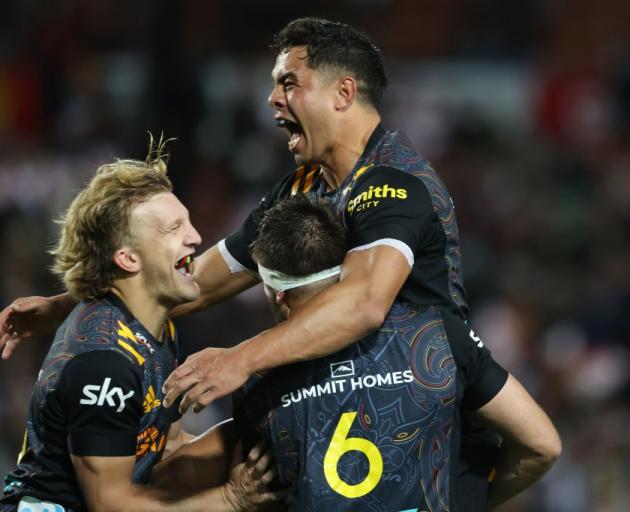 A jubilant Damian McKenzie (left) celebrates with Anton Lienert-Brown (top) and Mitchell Brown after beating the Crusaders by one point in Hamilton on Saturday night. Photo: Getty Images
Chiefs 26
Crusaders 25

Four victories in a row for the resurgent Chiefs, and with it a real chance at storming into the Super Rugby Aotearoa final.

Hamilton turned on another classic Chiefs and Crusaders contest on Saturday night. Much to the delight of the 18,500 locals, their men came up clutch at the death to hand Scott Robertson's Crusaders their second defeat of the season.

Last week Damian McKenzie nailed an extra-time penalty to snatch victory over the Highlanders in Dunedin. Tonight McKenzie, who was quiet otherwise in his switch to first five-eighth, did it again – this time slotting a 77th minute penalty to push the Chiefs one point ahead in the sixth lead change of the match.

That set up a frantic final three minutes where Chiefs lock Naitoa Ah Kuoi ultimately proved the hero after earning a turnover penalty inside his own 22 - just as Richie Mo'unga sat in the pocket waiting to attempt a match-winning drop goal.

Scott Barrett's captaincy referral was unsuccessful, and the Chiefs charged into second place, one point ahead of the faltering Blues.

Spare a thought for Clayton McMillian. The interim Chiefs coach came on board with this team on struggle street after Warren Gatland departed to British and Irish Lions duties. After dropping the first two games of the year, the Chiefs have found their belief and mojo to transform their fortunes and become a genuine title threat. 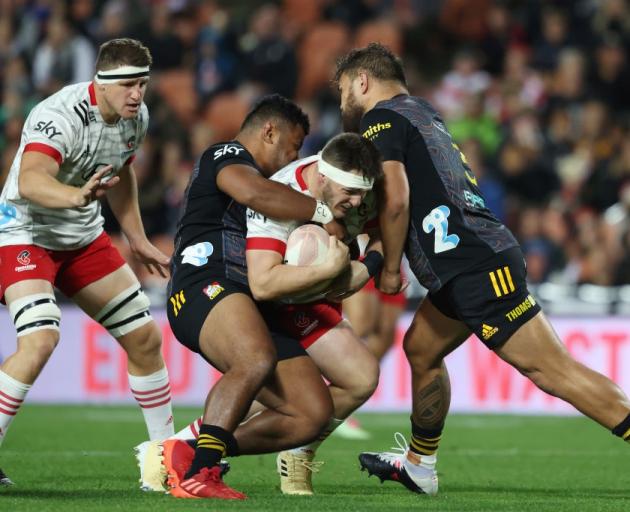 Crusader Brodie McAlister gets wrapped up in a tackle at FMG Stadium. Photo: Getty Images

Just as they were last week, the jubilant scenes at the final whistle from the Chiefs speaks to the heart this team has shown to overcome dark times after a record 11-match losing run.

With the Hurricanes at home and Blues away to come over the final two weeks, the Chiefs now have their finals hopes in their own hands.

There was always a sense the Crusaders were vulnerable after stuttering over the past two weeks, when they suffered a shock home loss to the Highlanders and snuck past the Hurricanes thanks to a David Havili drop goal in extra time after they lost All Blacks Jack Goodhue and Joe Moody to serious injuries.

Robertson revamped his forward pack with Barrett the only player remaining from last week's starting team, and even he made the positional switch to blindside.

The Crusaders led 17-9 at halftime and defended brilliantly for long periods but after failing to score a try in the first spell, the Chiefs ignited their attack to claim three in the second spell which proved telling.

With the Blues at home next week and the bye in the last round before the final, the Crusaders have serious work to prove the cracks that continue to appear can be swiftly amended.

Two tries from the Crusaders in the first half ensured the visitors held a comfortable lead at the break.

Leicester Fainga'anuku, starting his first match of the season at centre after coming in for injured All Black Goodhue, crashed over in the fifth minute to open the scoring but he would later depart after a head clash with All Blacks lock Tupou Vaa'i. 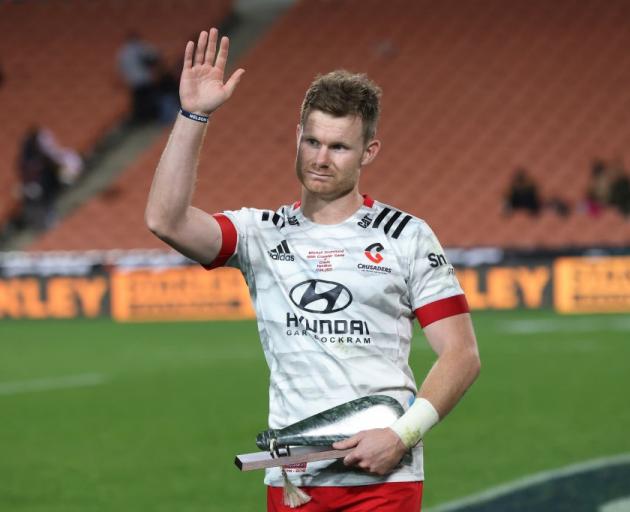 Crusaders halfback Mitchell Drummond acknowledges the crowd at a ceremony marking his 100th Super Rugby match. Photo: Getty Images
The Crusaders' second strike can be attributed to Mo'unga brilliance. With little on, the All Blacks playmaker popped off his right foot and offloaded to Barrett who lengthened his stride up the middle and, in turn, found Jordan on his shoulder supporting as all good fullbacks do.

Jordan was dangerous every time he touched the ball, making several incisions from the back, but on this occasion the Chiefs were guilty of lazy inside defending with two props caught napping.

The Chiefs had their chances, with Anton Lienert-Brown sparking a classy break and in-form No 8 Luke Jacobson hitting holes at pace off McKenzie passes. Try as they might, though, they could not crack the resilient Crusaders defence.

Tom Sanders, playing at openside, stole one vital turnover and Jordan pinched another, leaving the Chiefs to contemplate three successful McKenzie penalties in the first spell.

The Crusaders were largely in control at that point – clinically taking their chances until Mo'unga missed a simple conversion following Codie Taylor's sixth try of the season.

That opened the door for the Chiefs, down by six points, to launch a spirited comeback.

That same spirit carried them to an immensely valuable one point victory and could yet propel them into this year's maiden final.