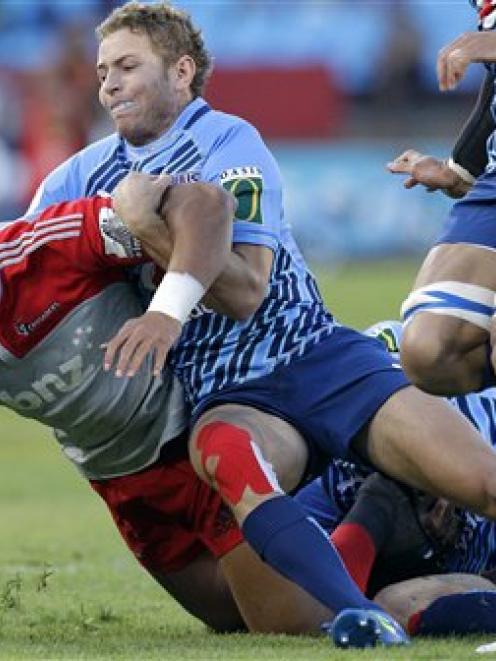 Crusaders back Robbie Fruean, left, is tackled by Johann Sadie. (AP Photo/Themba Hadebe)
Crusaders coach Todd Blackadder backed his team against charges of eye-gouging against the Northern Bulls during their 32-30 Super Rugby, saying he was concerned the new white card system could be manipulated.

Sanzar, SuperRugby's ruling body, introduced the use of white cards this season in cases where referees suspect foul play but have not seen the incident or are unsure of the culprit.

The card alerts the citing commissioner to view television replays and check whether action is required.

Blackadder told a news conference: "Personally, I'm bemused. If the allegations made are shown to be false then I expect an apology because they're pretty serious allegations. Otherwise anyone can make allegations and we'll have white cards all over the place. I'm not sure the system is designed for that.

"There's a process in place, but I would be very disappointed if the allegations are shown to be true. I know my players well, they're guys of character and there's no way they would do that. I'll be interested in the outcome."

Bulls coach Frans Ludeke said eye-gouging had no place in the game and he would be upset if the allegations were proven.

"There's no place for foul play and silly incidents like that," he told reporters. "There will be a review and there may be nothing, but it's not part of the game. No-one wants to see that sort of thing.

"It's tough to say what happened, but we'll leave it for the judicial officers, they specialise in that."