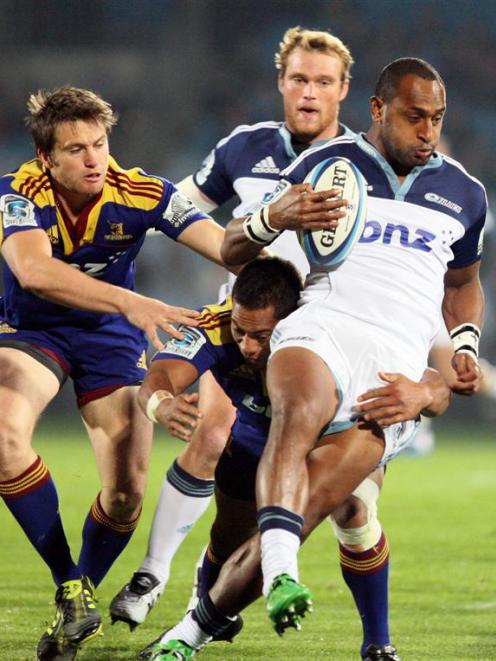 Blues player Joe Rokocoko in the tackle of Highlanders Ben Smith, left, and Alando Soakai. Credit:NZPA / Dianne Manso
The Blues consolidated their hold at the top of the New Zealand conference, subduing the Highlanders 15-10 on the back of a solid defensive performance in Dunedin tonight and also retain the Gordon Hunter Memorial Trophy.

The Blues were unable to break the Highlanders defence in turn, they had Luke McAlister on song with his boot as the second five-eighth knocked over five penalties to punish the Highlanders for giving penalties inside his range.

The Highlanders, who beat the Crusaders last week, were never out of the game though with the free flowing backline attacks sparked by some fine elusive running by Ben Smith and Kade Poki from deep inside their half.

The Blues started the match strongly to pin the Highlanders in deep defence for over 11 minutes which saw fullback Isaia Toeava prominent in a number of moves.

The Highlanders suffered an apparent blow when starting first five-eighth Tony Brown limped off in the 17th minute forcing a reshuffle in which fullback Robbie Robinson took his place at pivot and Matt Saunders coming off the bench to second five with Smith dropping to fullback.

The Highlanders always threatened when they had the ball but the Blues defence somehow managed to plug any gap to prevent any breakthrough.

McAlister kicked all three penalties in the half to give his side a 9-0 lead at halftime.

The Highlanders started the second half a player short after lock Jarrad Hoeata was binned in the final minute of the first half for a tackle penalty but they were the first to score with Robinson finishing off a forwards surge at the line after a Saunders break into the Blues' 22.

Robinson converted his own try and the scoreline became 12-10 after he and McAlister exchanged penalties.

The Blues stretched the lead out to 15-10 with another McAlister penalty just before he came off with a strained ankle with five minutes to go.