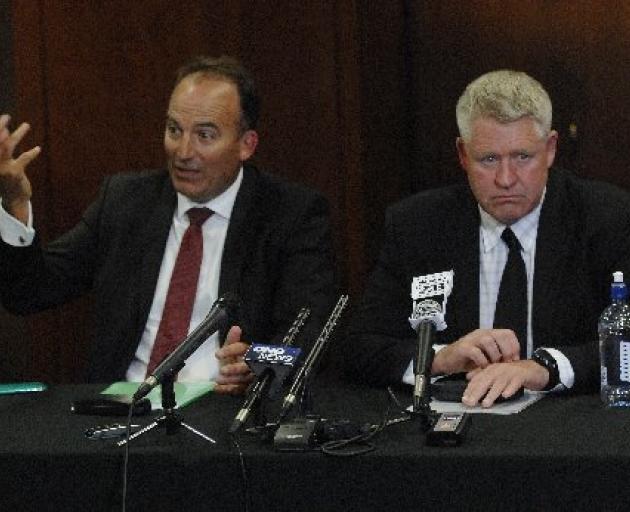 ORFU chairman Wayne Graham (left) and NZRU chief executive Steve Tew break the news to supporters and officials. Photos by Linda Robertson and ODT files.
Otago Rugby Football Union chairman Wayne Graham is unhappy about a suggested new Highlanders jersey, saying it goes against tradition and risks the future of the franchise in the South.

Graham said the union's board had not been consulted about the jersey and felt a change would go against the wishes of rugby fans in the South.

The Highlanders confirmed on Thursday the franchise was considering changing the jersey and it is believed a green playing strip would be worn by the players at next Friday night's game against the Force at Carisbrook.

Graham said he had not seen the new jersey and was disappointed at how it had come about.

Graham said the Highlanders jersey was one of the few franchise jerseys which had the colours of the provincial unions which it represented.

"As a rugby person, it is a major concern that this decision has been made without a lot of consideration of the tradition of the game down here," he said.

"I just can't understand the logic of wanting to change the jersey. Everything else is going so well. It seems to me that people who are making this decision are not connected with the rugby family in the South.

Graham said one of the biggest problems with changing the blue, gold and maroon colours was it opened up the threat of the franchise moving away.

"By cutting the ties with the colours, that is opening the door to a team that can go anywhere."

Highlanders general manager Roger Clark could not be reached for comment yesterday.

An announcement is expected on Monday.