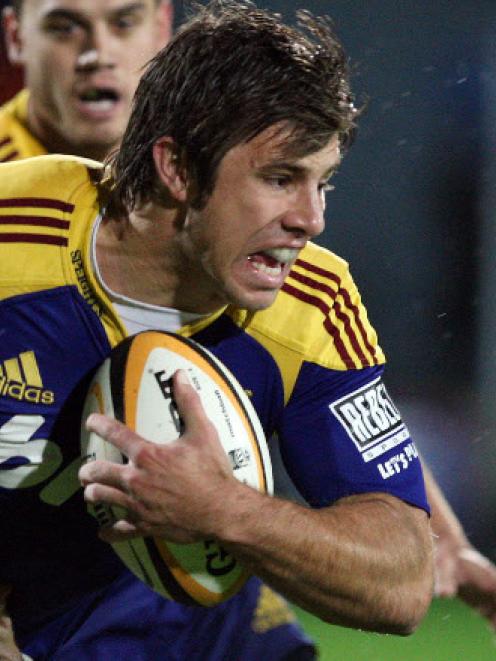 Highlanders player James Paterson, who scored a try 30 minutes into the game. Photo by NZPA.
Previous Highlanders teams would have buckled under the pressure, but not this one.

The southerners continued their Super 15 rugby resurgence tonight with their most prized scalp of the season, upsetting the in-form Crusaders 26-18 at Trafalgar Park in Nelson to remain firmly in contention for the top-six playoffs.

The hosts threw plenty at them in the second half, including introducing regular starters Sonny Bill Williams and Sean Maitland to the backline after starts on the bench, but the Highlanders defence stood up to the task and they always looked in control.

The win, their seventh from nine matches, takes the Highlanders to 34 points, one behind the Crusaders and five - or one bonus point win - adrift of the New Zealand conference-leading Blues, who are also atop the overall standings.

The Crusaders were missing key players such as All Blacks Dan Carter, Richie McCaw and Kieran Read but they could have few excuses tonight, outplayed across the park by a Highlanders team which impressed in the forward exchanges and with some uncompromising defence.

The Highlanders, 44-13 losers against the Crusaders in Dunedin earlier this season, made the worst possible start when first-five eighth Tony Brown fluffed the kickoff, they were penalised from the resulting scrum, and Crusaders pivot Matt Berquist landed a 50m penalty with the wind at his back to give the hosts a 3-0 lead in the opening minute.

Brown replied with a penalty of his own before the Crusaders struck the first significant blow of the evening, fullback Israel Dagg making a break down the blindside before drawing his opposite, Robbie Robinson, and sending left wing Zac Guildford on a clear run to the line.

The Highlanders were rewarded for their ball-in-hand approach when wing Sione Piutau finished off a neat scrum move, which twice featured former Crusaders No 8 Nasi Manu.

Berquist pushed the gap out to five points with a wind-assisted 45m dropped goal but the Highlanders took a 15-13 lead into the halftime break after wing James Paterson broke free down the left flank and made light work of a weak attempted tackle from Dagg to score in the corner.

In a near mirror image of the opening to the first half, Berquist botched the second half restart and the Highlanders made them pay.

With numbers out wide Brown showed all his experience in astutely assessing the situation before sending a pin-point cross kick to Paterson, who only had to catch the ball and fall over the line for his second and the Highlanders' third try of the match.

The Crusaders hammered away at the visitors but they were unable to make traction, at least until second five-eighth Adam Whitelock swooped on a loose pass in midfield to sprint 50m and score unopposed in the corner.

That brought the Crusaders to within two points at 18-20 with time on their side but Brown was gifted two simple penalties in quick succession and the southerners expertly used the wind to protect their lead and strangle the previous New Zealand conference leaders.