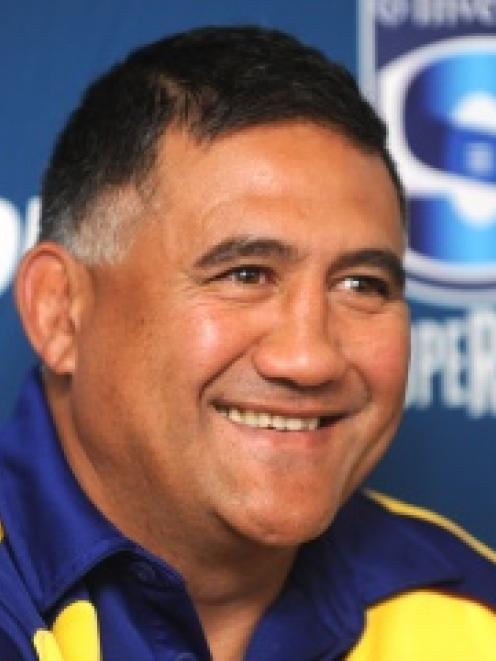 The Highlanders slumped to their seventh straight loss to start the season on Friday night, going down 30-19 to the Brumbies. It is their 10th straight loss, counting last season.

They are rock bottom of the Super 15, nine points behind the 14th-placed Rebels, a scenario that seemed unlikely at the start of the season, when the Highlanders were tipped by many as being playoff contenders.

Clark said he and the board had no doubt the right man was in charge of the side.

''Nothing has changed with that. The bottom line is the board and myself have got every confidence in Jamie. If anyone can turn it around then he can.''

Joseph was joined by Scott McLeod and Jon Preston this season, replacing Simon Culhane and Kieran Keane as assistant coaches. Again, Clark said he had the utmost confidence in the new coaches.

''We selected them because of the qualities we thought they could bring to the role. That hasn't changed. It is a hell of a challenge for them in their first year, but they are doing a really good job.

''It is a bloody tough job for them. They came into a new situation and they found themselves zip from seven. They are doing their best.''

Losses invariably lead to lower crowds and Clark said after averaging 17,000 last year - the first season in the new Forsyth Barr Stadium - crowds were down on that this year.

With the franchise relying on gate money and sponsorship for income, smaller crowds would invariably hit the bank balance.

Clark said he watched the team train every week, and the Highlanders were still working hard.

They could not be compared with the Blues last year, when the Auckland-based franchise lost seven straight games and finished 12th, which led to a change of head coach.

''It is quite a different scenario. If you watched the Blues last year they looked like a team in disarray. You look at our team, no-one would question how hard they are working.''

The Highlanders were beaten by the Reds by one point, and the Reds just beat the Chiefs, Clark pointed out. The Blues beat the Hurricanes convincingly last Saturday, yet the Highlanders had almost beaten the Blues the week before.

''We are not far off. And the thing is, with this competition, it is incredibly tough. If you are even 5% off your game then you will be found out.''

All Black second five-eighth Nonu had come under much criticism for his play for the Highlanders this year, but Clark rejected that.

''Personally, I think he has been one of our better players. Off the field and engaging with the community, he has been absolutely outstanding. One of the best in the team. To criticise him and blame him for where we are is absolutely ridiculous.

''All of us are trying really hard for a win. I have been impressed by how tight the guys have stayed together. They are determined to turn it around.

''And we have got to remember this is only early days. We are in a competition which goes to July. It is a long season. There is a lot of rugby to be played.''