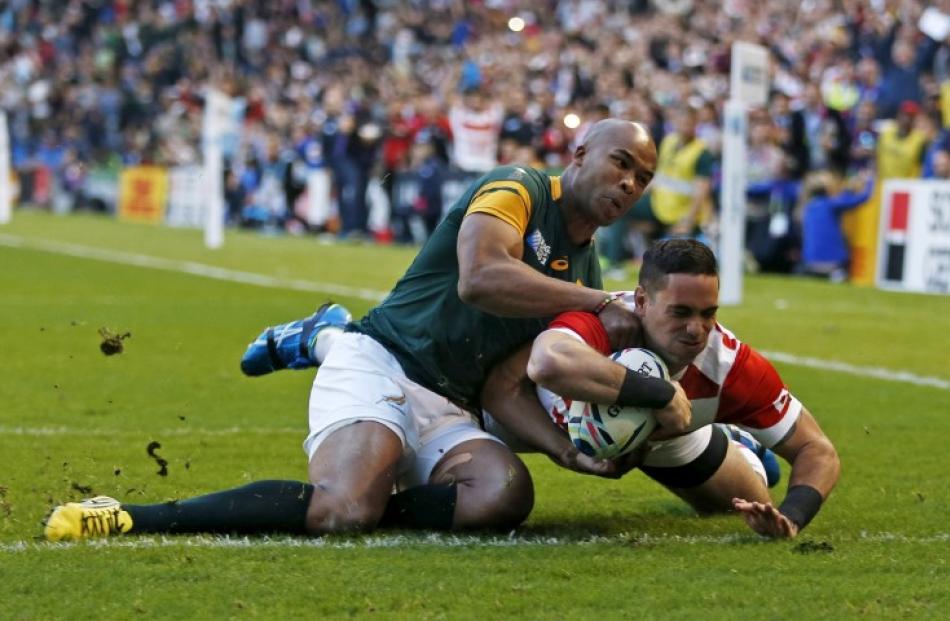 The greatest upset ever?

It is already being labelled the greatest upset in rugby history and while those terms get thrown around a lot these days, this match justifies being in the conversation.

Japan beating South Africa? It was unthinkable, even taking into account the improvements Japan have made.

France's 1999 and 2007 victories over the All Blacks were indeed upsets, but it was France and you would always give them a chance.

Samoa were underestimated before wins over Wales in 1991 and 1999, as were Fiji in 2007. Tonga's win over Australia in 1973 is often brought up, but the Wallabies were awful in New Zealand in 1972 so it was not as if it was one of Australia's best outfits. Aside from that you have a handful of midweek losses, where the likes of Newport, Munster and Llanelli beat the All Blacks.

But the World Cup is what everyone is peaking for and South Africa in particular are known for targeting the tournament. This Springbok team, while having looked average, still pushed the All Blacks and the Wallabies this year. Japan meanwhile came from seemingly nowhere, although perhaps hindsight will say we underestimated them.

Japan defended bravely, but they were spot on tactically too. The smallest team in the tournament, going up against one known for its brutality, they were always going to battle in the tight exchanges. Stealing ball at the breakdown was never going to be easy, with the difference in size and strength making it hard for Japan to withstand the Springbok cleaners. So the tactic had to be to fan out, come up fast, stay organised and be prepared to make a lot of tackles. It can put you under pressure, as it means the opposition will hold the ball for longer periods, but it also means there should be fewer gaps in your defensive line, therefore making it harder to break through.

In team a with plenty of New Zealand connections, there were three ex-Otago players on show for Japan. Highlanders crowd favourite Fumiaki Tanaka, who played for Otago in 2012 and 2013, was tidy at halfback and provided good service from the base. Alongside him, hooker Shota Horie, who was brought to Otago by Tony Brown at the same time as Tanaka, got through plenty of work. Then there was the last-minute hero Karne Hesketh, who came on with two minutes to go and scored the match-winning try. Hesketh played for Otago from 2006-2010 and was known for his strength which often made him hard to bring down with ball in hand.

Turning down shots and giving away penalties

The Springboks signalled their intentions from the word go, as they looked to kick up the line to set a lineout drive, rather than taking the points on offer when awarded a penalty. While they did score two tries from mauls, it would surely have been more advisable, or at least look less arrogant, to take the points early on and show you opponent that respect. They did not though and they paid for it, as at the other end, the Springboks' discipline was an issue and Japan did not need telling twice to take chances available to them.

Not letting your opponent get away

Upsets such as this generally come when the underdog can stick close to the favourite the whole way through the match. It is not often you see an inspired comeback. Generally after the gap widens, the score will blow out and the confidence levels will drop. It was of great importance then that Japan were able to keep accumulating points and stay in touch.

Decision to go for try the logical one

Michael Leitch deserves praise for looking to score a try rather than taking a shot in the game's dying moments. From an individual match perspective it would have been better for Japan to draw than potentially lose. But looking at the tournament as a whole, they needed to go for the win while it was there. Had they lost they would have still got a loser's bonus point, so a draw was only worth one more to them. Sure that one point could be crucial. But they are not a team that would be banking on winning all their games, and to get four is huge.

Japan's set-piece has gone from strength to strength over the past three years. That they held their own against the Springbok pack was impressive and even when they were under pressure, they got the ball out through a quick strike. Their lineout operated smoothly against one of the best in the world and they used the maul to great effect too.

It is nothing new to say the South African backs lack enterprise, although it was surprising given the players they have picked this time around. The back line looked more threatening once Handre Pollard came on at first five, but the attacking threats were non-existent. Japan fanned out on defence and South Africa kept banging away with forward runners and their backs running hard straight lines, occasionally trying to create something one-on-one. But there was no ingenuity, no one creating gaps, no set moves like the one Japan scored their brilliant second try from.

How far can Japan go?

Japan have come a long way in 20 years and for the first time have shown themselves capable of knocking off a genuine superpower of the game. But is that a true reflection of where they are at, or was it just an inspired performance against a complacent opponent? We will get a better idea when they take on Scotland on Thursday morning.

They were well and truly up for this game and while it will give them plenty of confidence, sometimes it can be hard to maintain that intensity over an extended period. That said, we have all seen what they are capable of now and have to be taken seriously by anyone who meets them.

It would be dangerous to write the Springboks off based on this one game. Their task has gotten a whole lot tougher, and they did look very average, but that has happened before and if you are going to lose, it is better to do it earlier than later.

South Africa should still enter their next three games as favourites and have every chance of topping the pool. They will have to play a lot better than they did today if they are to do that, although history says that it can happen.