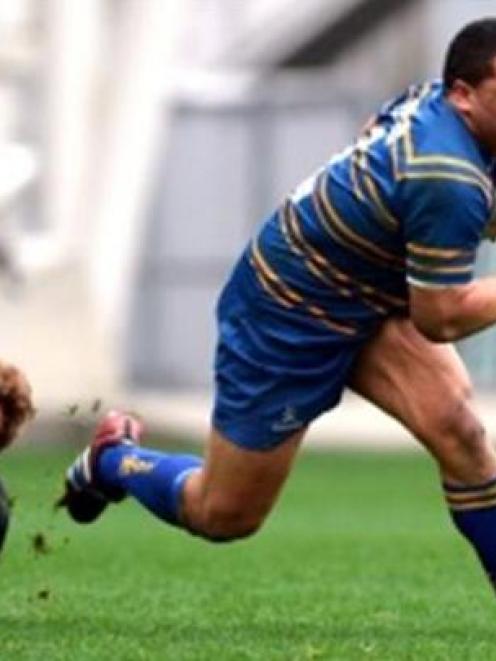 Alhambra-Union's 11-10 win over University A was the major upset in the penultimate round of Dunedin club rugby. Breen's side had lost its previous four games, and the students had won eight straight.

Taieri came back in the last 20 minutes to score 17 points and beat Dunedin 22-20 when golden oldie scrums were used.

Taieri and Dunedin are safely into the semifinals. Southern, University A and Alhambra-Union are still in contention for the last two spots.

Alhambra-Union plays Taieri at Peter Johnstone Park in the final round. In the other key games, Southern plays Pirates at Bathgate Park and University A plays Kaikorai at Bishopscourt.

It was winter rugby on Saturday, when most of the grounds were wet after overnight rain. It was particularly bleak at Watson Park, where Southern beat Harbour 23-0.

The Alhambra-Union forwards adapted better to the slippery conditions at the University Oval and paved the way for the narrow win.

A penalty by first five Peter Breen gave Alhambra-Union a 3-0 lead at the break and it held the lead for the first 35 minutes of the second spell.

Throughout the second spell Alhambra-Union concentrated its attack through the driving play of the forwards with the pick and go.

They controlled the ball and the students had few opportunities to attack through its lethal backline.

The best player in the Alhambra-Union pack was No 8 Liam Coltman, who made a habit of breaking the advantage line with the ball.

He was backed by flanker Matt Kissick, tighthead prop Scott Manson and hooker Ben Pereira. The rest of the pack came in behind to keep the students on the back foot.

Breen returned to his best form with strong straight running and with shrewd tactical kicking.

His kick to the corner bounced awkwardly and was missed by the student defence and centre Matt Dalley was up quickly and scored the try to take Alhambra-union to an 8-0 lead after 13 minutes of the second half.

University A No 8 Paul Grant led his team by example and made several strong runs that kept the defence on its toes.

The students finally got their act together, put five phases together and first five Stephen Fenemor broke through from 15m to score close to the posts.

Fenemor put the students in front, 10-8, with four minutes left with a sideline penalty.

Lively halfback Nick Annear was the other student back to impress, while prop Tama Tuirirangi had a solid game in the front row.

Dunedin was hamstrung by the removal of the scrum in its loss to Taieri at Forsyth Barr Stadium.

The Sharks had dominated the game for 60 minutes and led 20-5 when a Taieri prop was injured and the referee ordered golden oldie scrumsDunedin has the best tight forwards in the competition and its strong scrum is a launching pad for its attacks.

The Dunedin scrum was dominant and it stopped Taieri getting go-forward ball. Tighthead prop Kelsey Miller was having a blinder and he was backed by hooker Sam Anderson-Heather.

Dunedin also controlled the lineout, through the efforts of locks Sam Poole and Mitchell Zandstra and No 8 Gareth Evans.

A try to flanker Hugh Blake after 39 minutes gave Dunedin a comfortable 17-5 lead at the break, and it was extended early in the second spell by a penalty to Pera Gibbs.

With their confidence up, the Sharks turned down an easy three points from a penalty in front of the posts after 10 minutes in the second spell and went for the try. This proved to be a costly mistake.

The Taieri backline got into its rhythm and played with confidence in the last 20 minutes.

Southern kept play in the forwards, used the pick and go, and played the game in the Harbour half.

Harbour attempted to play dry-weather rugby and came unstuck, with a series of knock-ons and dropped passes that gave the advantage to Southern.

The first try was scored by winger Harry Uffindell after 17 minutes and Ben Patston added two penalty goals to give Southern a 13-0 lead at the break.

Conditions had become almost impossible for rugby in the second spell. An early penalty gave Southern the lead 16-0.

Harbour was forced to play catch-up rugby after this and found it impossible to break out in the conditions.

The Harbour defence was better in the second spell and the final Southern try did not come until the finish, when dynamic flanker TJ Ioane burst to the line from the Harbour 22m.

Ioane was the best player on the paddock with his skill on the drive and the pick and go. The other players to stand out in the Southern pack were lock Sam Gibson, No 8 Tom Franklin and openside flanker Dan Baxter.

Halfback Robbie Smith was tidy and was the best Southern back, with his probing runs down the short side and his kicks over the top.

Prop Mike Macdonald stiffened up the Harbour defence when he came on in the second spell and loose forwards Dalton Ellis and Angus Duckett had lively games.

The Kaikorai forwards took control from the start and paved the way for a commanding win over Green Island at Miller Park.

The tight forwards dominated the scrum, while prop Blair Laughton also made ground with his driving runs and the pick and go.

Kaikorai scored five tries in the first spell to lead 31-0 at the break and added two more converted tries in the second spell.

Kaikorai had remarkable ball control in the slippery conditions that became muddy in the second spell.

First five-eighth Matt Te Tana was the master tactician and varied the attack, centre Jayden Spence ran straight, and pacy fullback Tony Ensor cut through the defence on the counter-attack.

The game was virtually over when Kaikorai led 31-0 at the break.

Simon McCarthy was tidy in the front row, No 8 Jackson Hemopo was solid on defence, halfback Dean Moeahu used his experience on defence and centre Roma Saulieoge made some strong bursts up the midfield.

Pirates made good use of its wind advantage in the first spell to score two tries when it beat Zingari-Richmond in slippery conditions at Hancock Park.

The Pirates forwards played aggressively to set up a platform that their backs used to take a 12-0 lead at the break.

Flanker Shaun McCarroll was dominant at the breakdown and the backline used the quick ball to make inroads into Zingari territory.

Paul Miller was an aggressive lock and dangerous with the ball, and prop Hisa Sasagi was a rock on defence and made ground with the pick and go.

The first Pirates try came after a quick tap from a penalty, when Glenn Dickson broke the first defensive line and McCarroll was in support to score the try.

The second try was a brilliant individual effort by fullback Kieran Fowler, who burst through the defence on the 10m mark and kept running.

The Zingari forwards took control in the second spell. Prop Jeremy Bekhuis was particularly strong and was rewarded with a try.

No 8 Chris Bell was the workhorse and Tom Rowe was dominant in the lineout.

Halfback Enoka Taufua was a lively halfback and the other Zingari back to stand out was fullback Mark Hunter.

They camped inside the Pirates 22m for long periods but spoiled their scoring chances by taking wrong options and dropping the ball.