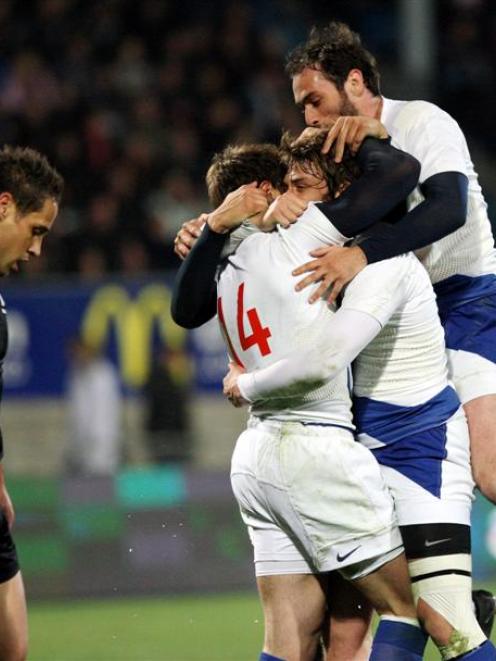 French teammates celebrate Maxime Medard try as a dejected New Zealand's Luke McAlister looks on. NZPA /Dianne Manson
At the World Cup it was devastation. Tonight it was utter frustration inflicted on the All Blacks by France who were deserved 27-22 winners in the first rugby test at Carisbrook.

A new-look New Zealand side failed to adapt to the rigours of the test game, outscored three tries to two by opponents who simply played more pragmatic rugby, defending aggressively and adopting a far more accurate kicking game.

They led 17-3 after 26 minutes, absorbed a comeback from the hosts who tied proceedings at 17-17 with 20 minutes remaining before clinching victory with an intercept from star fullback Maxime Medart. He swallowed up a loose pass from Luke McAlister in what was a disastrous return to All Blacks colours for the playmaker who has been based in the English club game for 18 months.

It continues the French depression for New Zealand coach Graham Henry and his team, nearly two years after their last meeting, the fateful 20-18 World Cup quarterfinal loss in Cardiff.

While the New Zealanders weren't talking revenge this week, the result would have stung deeply, particularly as they hoping to prove they can play top rugby without injured stars Richie McCaw and Daniel Carter.

A host of other players were missing with injury and the green nature of the team was shown up by the tourists, who rushed effectively on defence and had an edge at the scrum and breakdown areas, overshadowing the raw loose forward trio of Liam Messam, Adam Thomson and Kieran Read.

No one would be hurting more than fullback Mils Muliaina in his first test as captain, unable to lift his side to a win that appeared on the cards when his team scored 14 unanswered points either side of halftime.

They paid for too many inaccurate kicks of both the long and short, attacking variety.

Almost all were gobbled up easily by the French back three, of whom Medart was a standout with his elusive responses.

In their first visit to Carisbrook, the French defence bore all the hallmarks of their 20-18 win at Cardiff.

It appeared their intensity was dropping in the second half but they found a second wind to secure just their fourth win in 22 matches on New Zealand soil.

France were never behind at any stage, with debut halfback Julien Dupuy opening the scoring after his forwards rumbled a maul 20m in the third minute.

Trinh-Duc's was a remarkable score, taking the first pass off the scrum and shrugging off the tackles of all three loose forwards along with Muliana, who collided with Messam when both went high.

Servat burrowed over to complete a brilliant team counter attack from 70m out after Messam had broken down the left and chipped ahead.

A Donald penalty in the 38th minute was followed by a try to Messam on the stroke of halftime, brilliantly set up by winger Cory Jane in his first test start. Jane swooped on a short box kick from Cowan and kept the cover defence at bay with a swerving run before sending the athletic No 8 over.

The All Blacks clamped control after halftime, levelling the scores through Donald penalties in the 50th and 57th minute, the latter from nearly 50m out.

However, they couldn't maintain the pressure and Dupuy put them back in front with a penalty before the brilliant Medard snapped up his matchwinning intercept, jigging clear of the chasing McAlister in a glorious 70m run.

Muliana danced through to set up a try to second five-eighth Ma'a Nonu with 4min on the clock but his team failed to secure possession in the dying stages.

The All Blacks had paid the price for making silly mistakes, falling off tackles and giving up turnover ball, Muliaina said.

"We put ourselves under immense pressure -- it was a big learning curve and we have got to learn fast. Next week we got to be a lot better than we were tonight." French skipper Thierry Dusautoir said his team had given their all in defence and attack.

"It was very tough, we were very nervous before match but we gave our all and earned this win -- we are very proud . . . and we are going to enjoy this victory." The second test is at Wellington on Saturday.