Rugby: Realist ready to roll up his sleeves 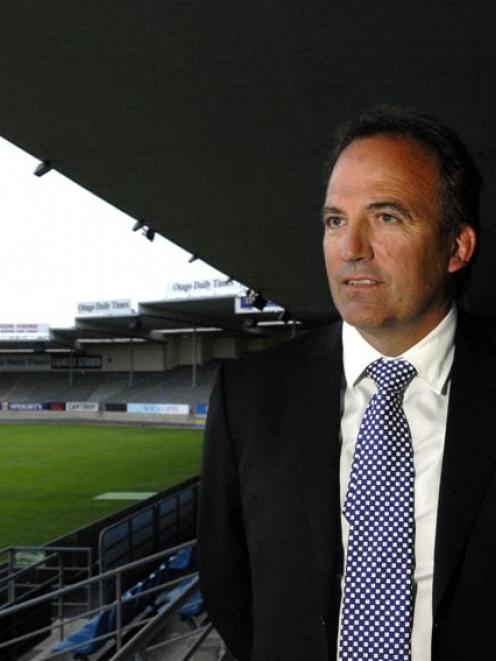 New Otago Rugby Football Union chairman Wayne Graham at Carisbrook: "Because we are fighting as the underdog we can't afford to be inaccurate. We've got to be right all the time." Photo by Gregor Richardson.
Wayne Graham has done just about everything in Otago rugby. Player, captain, coach and now chairman. Rugby writer Steve Hepburn talks to Graham about what he sees for the future of Otago rugby.

Wayne Graham is not one to let things happen. He is a doer, not a watcher.

He has built a successful real estate company in Otago, coached sides to premier club rugby titles and steered Otago all the way to the national provincial championship final in 2005.

So when he takes the reins as chairman of the Otago Rugby Football Union board, you can expect things to happen.

"I think what you'll see from this board is about being a lot more pro-active than the last board.

"With that we'll be assisting the staff to move in the right direction.

"That doesn't mean we'll be out on the training paddock.

"We'll be helping without interfering.

"But we really need to have our finger on the pulse.

"There is a lot of experience and knowledge sitting around that table and it shouldn't be wasted.

"We all know the competition we face from those up north.

"They would take it all away from us tomorrow, or even yesterday if they could."

Graham, though, is a realist.

He knows through population alone Otago is always going to find it tough going against bigger unions.

"I have been critical in the past few years over the player retention and recruitment, and it has not been accurate enough.

"Because we are fighting as the underdog we can't afford to be inaccurate. We've got to be right all the time.

"We are not happy with where we are at the moment.

"It's not just the performance of the top team, but a combination of things.

"We need to have a look at the whole of the Otago rugby province and find ourselves the right people and right systems in place . . . hopefully, other people can come assist in all sorts of areas."

Graham has known the highs and lows of Otago rugby.

He coached a side to beat Canterbury twice in 2005 on the way to the final, but he was in the Otago side in 1979 which, but for a missed conversion, would have been relegated to the second division.

"It lost direction back then and we had lost some senior players.

"But the board pulled it together and made some changes and we were successful for the next 10 to 20 years.

"It [Otago rugby] is something we all still care about. We can turn it around.

"It is something about the place. I've always enjoyed the passion of Otago rugby.

"We've let that slip a little bit because of results and things.

"But in 2005 we were in the final and that was not that long ago. People forget pretty quickly."

Graham said he would not be downscaling his business interests while in his new role, and he planned to share the load around what he called a talented and energetic board.

He said finances were a huge issue, something with which the new board had to come to terms.

The union lost more than $750,000 last year and was forced to make redundancies.

"We had the Alando [Otago captain Alando Soakai] situation last week, where Auckland came in with an offer greater than us and that lead to us having to match it.

"Thankfully for us, Alando decided to stay loyal and remain in Otago.

"But that is what we are faced with when you are dealing in business.

"We've got to go out and get the resources.

"If you don't go out and get the resources then you come off second best all the time.

"That is the reality of professional rugby."

Graham, who said he had no idea how long he would be in the role, said he was looking for support from the business community and other stakeholders of the sport throughout Otago.

He was part of the committee that appointed Australian Phil Mooney as Otago coach, and said the announcement could have been handled better.

"The intention was always to have Phil and David [Latta] together, but initially it was not handled particularly well.

"This year is a big year for the position and we needed someone who has coached at the highest level with experience.

"Phil was the best available candidate at the time and fulfilled the criteria.

"David has that passion and knows what Otago means and is about.

"But he has no experience at that level.

"It would have been a huge gamble to put him in that position.

"I've been through that myself and it is tough.

"It is a huge obstacle to overcome and can be a pretty lonely position when the heat comes on.

"But it has all worked out well now with David and Phil together.

"That is the best combination we can possibly have."

Graham confirmed Mike Moeahu, who coached Otago B last year, would again have that role, and be involved with the top Otago side as well.

"We have got three top people involved.

"If they want support then they have Laurie [Mains] and myself backing them up, and who have been there before."

First played for Otago in June 1976 against South Canterbury in Timaru.

Finished in May 1986 against Southland at Carisbrook.

Played 111 games for Otago as a lock/loose forward.

Played eight games for the All Blacks, including one test against France in 1979 and was part of the grand slam All Black touring team in 1978 but did not play a test.