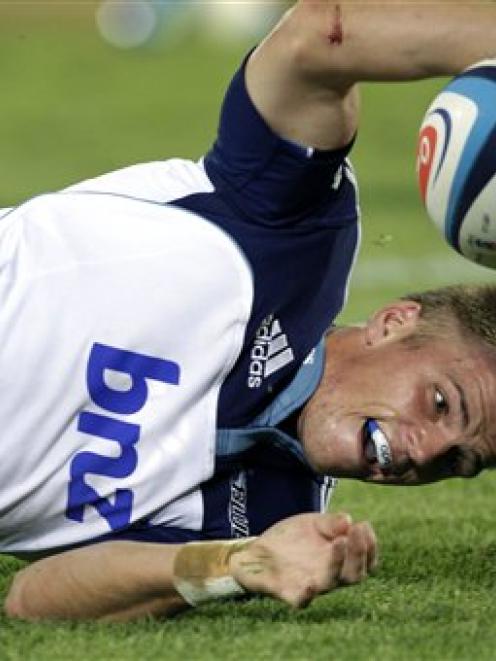 Gareth Anscombe scores a try for the Bluea against the Bulls at the Loftus Versfeld Stadium in Pretoria, South Africa. (AP Photo/Themba Hadebe)
The defending champion Queensland Reds and surprise package Otago Highlanders achieved narrow wins to stay unbeaten after three rounds in a Super 15 rugby tournament where winning has been a hard habit to gain.

Of the 21 matches played so far in a 126-match regular season, only seven have been won by margins of more than seven points. In the latest round, only the Wellington Hurricanes' 41-19 win over the Western Force and the Sharks' 32-20 win over the Lions were achieved with any level of comfort.

The New Zealand conference paints a picture of a tough competition: after three rounds the Highlanders are the only unbeaten side while the more-favoured Crusaders and Blues have only one win each.

The Blues broke through for their first win of the season on Saturday when they beat three-time champions the Bulls 29-23 at Loftus Versfeld in Pretoria. Flyhalf Gareth Anscomb scored all of his team's points, including two tries, to relieve pressure after early losses to the Crusaders and Chiefs.

After beating the Blues in the opening round, the seven-time champions Crusaders stumbled to their second-straight loss, going down 24-19 to the Chiefs.

That result contributed to the unusual appearance of the standings in the New Zealand conference with the Highlanders on top ahead of the Chiefs and Hurricanes - both 2-1 - and the Crusaders and Blues - both 1-2 - struggling at the foot of the table.

The Reds are the only team in the Australian conference with a 3-0 record, though they share the top of the table with the Brumbies, who are unbeaten in two matches after an early-season bye and Friday's desperate 24-23 win over the Bloemfontein-based Cheetahs.

In South Africa, the Stormers are the only unbeaten team, although are also only 2-0 after a bye in the latest round. The Bulls' loss to the Blues was their first of the season while the Sharks' win over the Lions, in their first home match of the season at Durban, was also their first win.

The Johannesburg-based Lions remain 1-2 and the Bloemfontein-based Cheetahs have yet to win after three rounds, though they came desperately close in Canberra on Friday.

Usually, by the third round of the season, some clarity has emerged over the strength and weakness of teams within each conference but after the latest round the signs are still ambiguous.

While the Highlanders and Reds have managed to preserve unbeaten records, neither could be said to have done so with authority. The Highlanders' winning margins so far have been four points (23-19) over the Chiefs, three points (27-24) over the Crusaders and one point, 18-17 on Saturday over the New South Wales Waratahs.

The Stormers won their opening match by 13 points (39-26) over the Hurricanes but their second by only three points (15-12) over the Sharks in a match in which all points came from penalties.

In a revealing demonstration of the closeness of the competition, the points differentials of the teams leading each conference are unusually tight. The Brumbies are +3 (43-40) and the Reds +24 in the Australian conference, the Highlanders are +8 (68-60) in the New Zealand conference and the Stormers are +16 in the South African conference.

The 20-year-old Anscombe scored tries in the second and 38th minutes to help the Blues to a 20-8 halftime lead, then landed seven goals from nine attempts, outscoring prolific Springboks No. 10 Morne Steyn, who managed only three from seven.

"It's a pretty daunting debut at this stadium," Anscombe said. "The forwards fronted up and luckily I banged over a few goals and took some opportunities."

Anscombe was thrust into the flyhalf role when regular starter Michael Hobbs was forced to return to New Zealand because his father, former All Black captain Jock Hobbs, is gravely ill with leukemia.

All Black flyhalf Colin Slade landed a 66th-minute penalty to clinch the Highlanders' one-point win over the Waratahs, who led for much of the match. Slade had a mixed kicking day, landing only one of his first three attempts but made sure of his last penalty after kicking the conversion of John Hardie's second-half try.

The Waratahs lost flanker Pat McCutcheon, who broke an ankle in scoring a try which gave them a 14-8 lead after 44 minutes.

Second-year winger Dom Shipperley scored the only try of the match in the 55th minute as the Reds beat Melbourne 11-6. Michael Harris added two penalties for the winner while Wallabies flyhalf James O'Connor provided all of Melbourne's points with two penalty goals in front of more than 34,000 fans in Brisbane.