Rugby: Tanaka developing a real pride in the South 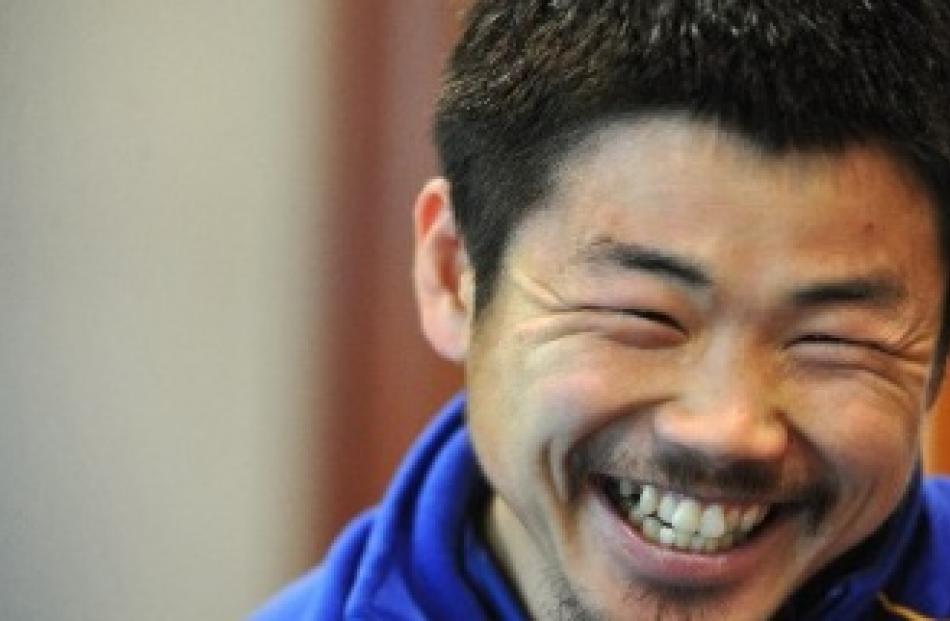 Otago halfback Fumiaki Tanaka: ''I might say something but then everybody laughs. I don't have any problem playing. I just say a few words and people understand me.'' Photo by Craig Baxter.

He likes his Speight's, has developed a fondness for beetroot and is going to have a baby in the South.

Fumiaki Tanaka (28) has been in Dunedin for about 15 months, and it appears he and the city have taken to each other.

Tanaka played a vital role for Otago in the ITM Cup last year, as the side went all the way to the Championship final.

His form earned him selection in the Highlanders and, although he started the bulk of the season behind All Black halfback Aaron Smith, he impressed enough when he got on to the field.

His English is still not the best, but he says he has really enjoyed the time in Dunedin and the rugby.

''The rugby here is really, really hard. Everybody is very smart,'' he said.

''Japanese rugby is very quick, very quick. But not as physically hard as here. And here, everyone is very smart. They know their job.''

Tanaka knows his job pretty well for Otago: get to the breakdown and move the ball.

Otago plays a high-tempo, fast-paced game, and Tanaka - all 72kg of him - is a key to that. He always seems to be there when the ball comes back from the ruck, so the ball is always in motion.

Tanaka, who has now played 36 tests for Japan, is a man who loves life. He is playing a sport he loves, and in a country where the sport is big news.

He went back to Japan in the Super 15 break in June and played a couple of tests.

He admits to being something of a frequent flier between Japan and New Zealand, having been back five times to his homeland since he arrived in Dunedin.

Tanaka said he was happy with his performance for Otago but not so much for the Highlanders.

''All right for Otago, but Highlanders I need to work harder.''

His English was good enough on the field, he said.

''I might say something but then everybody laughs. I don't have any problem playing. I just say a few words and people understand me.''

Tanaka's size has not been a handicap for him. His opposite tomorrow, Samisoni Fisilau, is 31kg heavier than Tanaka. But Tanaka punches above his weight.

Soon, he will have the weight of other responsibilities on his shoulders. His wife, Tomomi, is pregnant and the couple are expecting their first baby in October.

The baby will be born in Dunedin and Tanaka will be wetting the baby's head with a Speight's, as he admits he has developed a liking for the southern brew.

Tanaka's agent and the Highlanders are talking about another year with the franchise but the halfback said nothing had been signed yet.

For now, it is time to concentrate on the Otago season, and that starts tomorrow with a match against Bay of Plenty at Forsyth Barr Stadium.

Otago has to take scalps off the big boys in the Premiership to prove its abilities and that needs to start with a victory over a Bay of Plenty side which is going through a period of change. It has lost the likes of fullback Toby Arnold, winger Lelia Masaga and flanker Luke Braid.

Former Otago centre Brett Mather will line up in the Bay of Plenty midfield alongside Kendrick Lynn, who played 37 games for the Highlanders. Highlanders replacement winger Tino Nemani will make his debut for the Steamers.

Otago will wear a special jersey in partnership with sponsor Speight's.