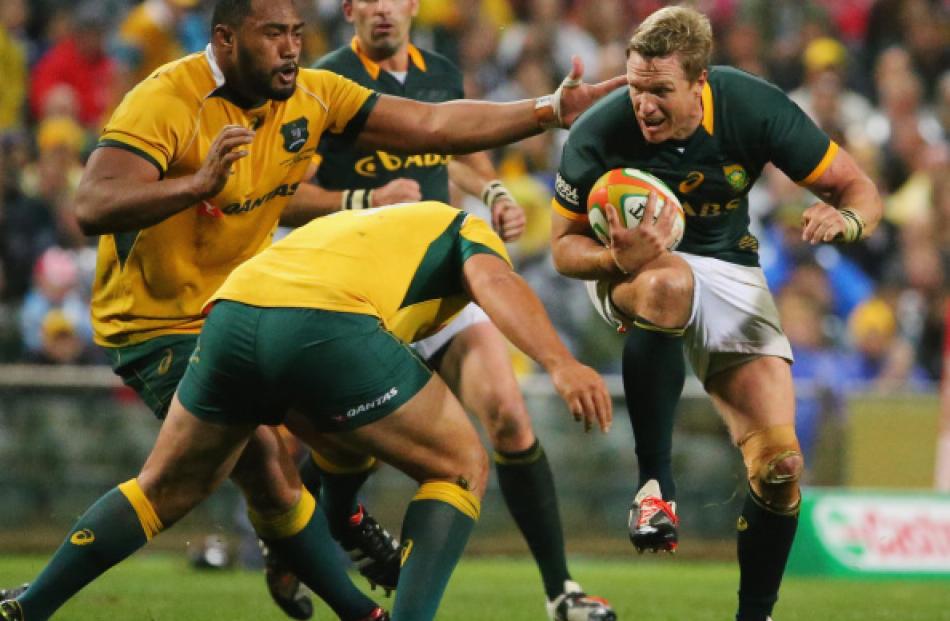 Springbok captain Jean de Villiers (R) tries to get past the Wallabies defence during their match in Perth at the weekend. Photo Getty

Jean de Villiers dearly wants to sidestep an apparent Springboks' century curse when he plays test No 100 against the All Blacks.

The South African captain will become the fifth player from his country to raise three figures when he leads them out for the Rugby Championship test in  Wellington on Saturday.

From that group, only lock and teammate Victor Matfield tasted success in his landmark game.

Fullback Percy Montgomery missed his only two shots in a 19-0 humbling from the All Blacks at Cape Town in 2008.

Two years later hooker John Smit missed a key tackle as the All Blacks scored through fullback Israel Dagg in the final play to win 29-22 at Soweto.

Those outcomes don't rattle 33-year-old midfield back de Villiers but he is anxious his teammates don't get carried away by the occasion.

"But obviously there will be a lot of emotion that goes with it.

"I'd like to think that our team will be well prepared and will be highly motivated to make the Bok jersey proud."

De Villiers' wife Marlie, pregnant with their third child, and his father will be in the crowd to watch one of rugby's most respected players reach a long-awaited goal.

His test career was just seven minutes old against France in 2002 when he suffered a serious knee injury.

He missed the World Cup a year later due to another knock, meaning there was 20 months between his first and second tests.

"I went through a lot of hard times but I believe I got through it stronger."

His 21 tests against the All Blacks have reaped eight wins, one of the best records held by contemporary players.

He made an instant impact against them in 2004 on the wing when he crossed just 27 seconds into a test in Christchurch.

"Having played against them so many times before. You do build up a bit of a relationship, a bit of a friendship.

"And definitely a respect as well."