Rugby: We would like to hold our heads high - Diack 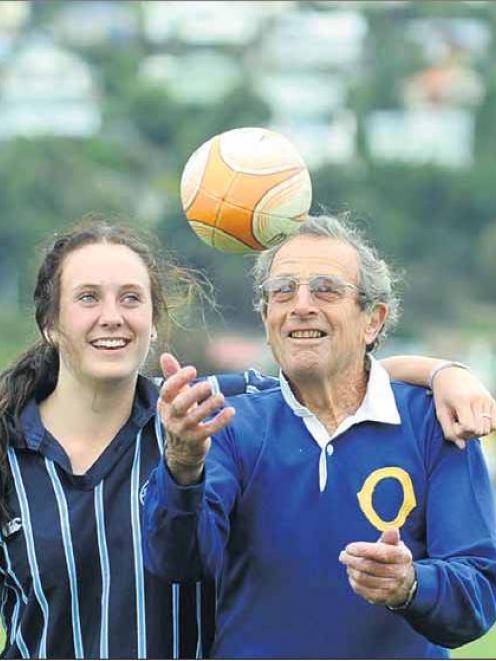 Otago great and 1959 All Black Tuppy Diack tosses a ball at Bathgate Park, Dunedin, yesterday with rugby-playing granddaughter Libby Jones. Photo: Stephen Jaquiery
Liquidation has been avoided - for now - but it has still been a sad week for Otago greats Tuppy Diack and Ray Bell.

The news of the Otago Rugby Football Union's possible liquidation was a body blow to both former All Blacks.

"It's devastating," Mr Diack said. "I don't know what you can say other than that. It's a very sad day.

"We would like to hold our heads high and carry on but it sounds impossible."

"They were happy days and we had good times," he said.

"Good crowds watched the games in club and representative football.

"We had the pipe bands and parades for the Otago v Southland games and people got behind us."

Mr Diack was president of the ORFU in 2005 and elected a life member in 2007. His playing highlight was lifting the Ranfurly Shield from Wellington at Athletic Park in 1957.

Mr Diack had special pride last year when his granddaughter Libby Jones (16) was a member of the St Hilda's Collegiate year 10 team that won the Dunedin secondary schools competition.

Mr Bell played 29 games for Otago between 1945 and 1952 and was a key member of Vic Cavanagh's great Otago Ranfurly Shield teams.

He was upset on hearing of the ORFU's $2.3 million debt and possible liquidation.

"They have been running at a loss for so long and done nothing about it," he said. "That's what I'm perturbed about. It was never mentioned that we were in dire straits.

"They have got businessmen on the board and I'm sure they wouldn't have let their business run like that."

Carisbrook was the second home for Bell during his playing days with Pirates and Otago.

"It was bad enough losing Carisbrook, but my mind boggled when we might not be able to field an Otago team."