All Blacks stick with dual playmakers 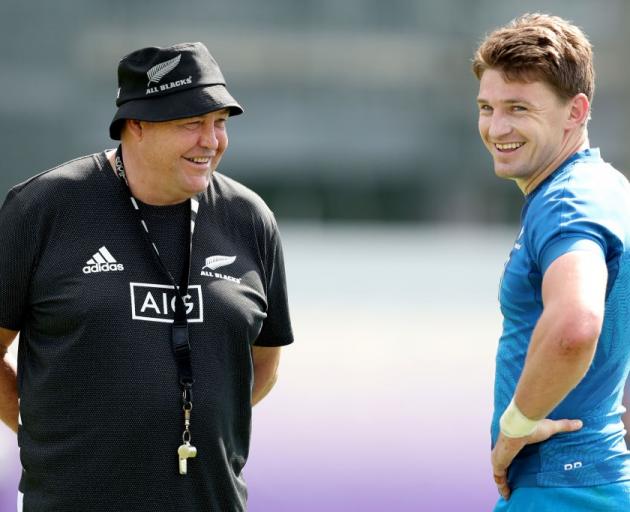 Beauden Barrett will start at fullback in the All Black side named by Steve Hansen (left) today. Photo: Getty Images
The All Blacks are sticking with their dual playmaker approach for their 2019 Rugby World Cup opener against the Springboks in Yokohama.

Beauden Barrett will start at fullback with Richie Mo'unga at first five-eighth for the much-anticipated clash on Saturday night, in what many believe could be a rehearsal for the final on November 2.

Several other tricky selections in the backline saw Anton Lienert-Brown and Ryan Crotty earn the nod as the starting midfielders, with Sonny Bill Williams on the bench, while Sevu Reece and George Bridge will start on the wings, with Ben Smith a utility option from the reserves.

Aaron Smith reveals what it's like playing inside Beauden Barrett and Richie Mo'unga.

Other selections of interest are Ardie Savea and Sam Cane starting alongside Kieran Read in the loose forwards, while Scott Barrett edged out Patrick Tuipulotu to start at lock.

Shannon Frizell earns a spot on the bench despite only being a late call-up for the injured Luke Jacobson, while Ofa Tuungafasi and Angus Ta'avao back up Joe Moody and Nepo Laulala as the All Blacks' propping options.

Ever since South Africa were dealt a humiliating 57-0 thrashing in North Harbour in September 2017, the two sides have been almost impossible to separate. The All Blacks claimed a 25-24 victory in Cape Town a month after that thumping before South Africa hit back with a 36-34 triumph in Wellington last September.

A 32-30 All Blacks victory followed a month later, and the last game was the closest of the lot - a 16-all draw in July. Twenty-two of South Africa's players from that clash in July are also playing in Saturday's opener, after they named an unchanged side yesterday.