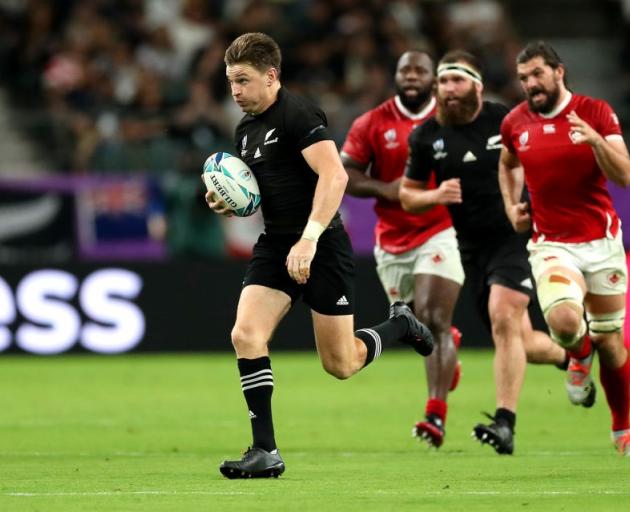 Beauden Barrett has been carrying a leg niggle for the past month. Photo: Getty Images
From the outside looking in it seems Beauden Barrett is playing some of the best rugby of his career.

No one would suspect he is unable to run at full tilt but the All Blacks playmaker has revealed exactly that – a niggly injury is hindering his top-end pace at the World Cup.

In his two matches thus far in Japan, Barrett, a two-time World Rugby player of the year, has starred from fullback for the All Blacks.

In the opening victory over the Springboks, he hit the line to burst through and set up George Bridge's try.

The following week, Barrett scored from a Sonny Bill Williams grubber and was heavily involved in many other sweeping attacking movements from the back.

Notably, in that 63-0 win over Canada in Oita, Barrett was run down for one of the first times in his career after breaking through, losing the ball in the humid conditions to blow a try near the end of the match.

He then ran the water and watched on proudly as younger brother Jordie nailed his starting test debut at first five-eighth against Namibia.

As the All Blacks prepare for their final pool match against Italy at Toyota Stadium this weekend, where he is expected to return to fullback, Barrett revealed an ominous warning that there is more to come from a speed perspective.

"Mentally I'm feeling great," Barrett told the Herald in Tokyo. "Physically not quite there but I've been working hard on getting my body right and to where I'd like it to be.

"I've been battling with a lower leg issue, a bit of a niggle, for a month now. It's been a frustration but it's starting to feel really good."

While reluctant to specify the exact nature of the injury, Barrett is confident it will soon heal.

"I want to keep it pretty general at this point. I don't want to make it an excuse. I'm quite positive about it but it's been frustrating at times where I'd like to open up and it's been hindering that.

"Today it's been great and it's trusting the medical team are doing a great job. I'm sure if they didn't think it was right they wouldn't have me out there."

Barrett opening up more and adding another couple of clicks to his top-end pace is not what opposition defences wanted to hear.

When he puts the foot down and goes for any half gap, more often than not he breaks the line or creates opportunities for others. Soon he may be more difficult to contain.

Six tests into their budding partnership, Barrett's combination with Richie Mo'unga is starting to gel as the All Blacks envisioned, the dual playmakers proving equally lethal threats on either side of the field.

Barrett appears to be thriving with the extra time, space and freedom the fullback role brings while Mo'unga continues to grow in confidence as he pulls the strings in the No 10 jersey.

"I'm certainly enjoying the role and everything is going fine from that point of view," Barrett said. "I'm just chipping away at a couple of things.

"Richie and I have spoken about ways to figure out how to play so we're not in each other's pocket and finding our own space. Whether we go forward with that plan or not it's something that we're conscious of and really looking forward to working on."