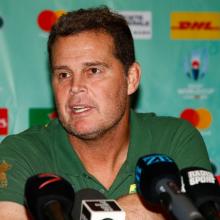 Rassie Erasmus. Photo: Getty Images
South Africa have made three changes to their first-choice pack as they brace for a muscular forward challenge.

They play Italy in their crunch Rugby World Cup Pool B clash at the Shizuoka Stadium on Friday.

Two of the switches are in the front row as hooker Bongi Mbonambi and experienced prop Tendai Mtawarira come in for Malcolm Marx and Steven Kitshoff respectively.

Lock Lood de Jager, who did not start against New Zealand in their opening fixture, has also been preferred to Franco Mostert as coach Rassie Erasmus looks for continuity in the lineout after a six-day turn-around from the 57-3 victory over Namibia in Toyota City.

Erasmus has been clear that he will select what he sees as his strongest side for the New Zealand and Italy matches, both crucial in their quarterfinal hunt, and secondary selections against Namibia and Canada.

"This game is going to be decided by the forwards and at the set phases and we wanted to maximise our options in those battles," Erasmus said.

"The challenge for us will be up front, not that we think they don’t have a backline.

"For us this is a crunch game, it’s do-or-die. We will do what we have to do, if we have to grind it out, no matter how we do it, win with a drop-goal or something, we will do it to get out of the pool stages."

The Boks have chosen a six-two split on the bench, overloading with forwards – hooker Marx, props Kitshoff and Vincent Koch, locks RG Snyman and Franco Mostert, and loose-forward Francois Louw, another sign that Erasmus is concerned about the battle in the pack.

It means the only backline cover comes from utility back Frans Steyn and scrum-half Herschel Jantjies, but Erasmus feels they have enough versatility on the pitch to cover for any eventualities.

"People may think it is a gamble to have only two back replacements, but we want to have plenty of ammunition for what is likely to be a major forward battle.

"It’s a 23-player game these days and the players who come on will be expected to contribute almost as much in game time as those who start among the front rowers.

"Frans can cover [number] 10, 12 and 15, Damian de Allende can play at 13, Cheslin [Kolbe] can play scrumhalf or full-back and Faf [De Klerk] can even play as a flyhalf if needed. So we have a lot of options."

Centre Jesse Kriel has not been considered as he recovers from a hamstring injury picked up in the opening 23-13 loss to New Zealand.