Ireland coach Joe Schmidt said he was heartbroken after his dream of leading them to a first ever World Cup semi-final was torn to shreds by a devastating New Zealand performance in Tokyo.

Schmidt, who will step down as Ireland coach following the tournament, has presided over a golden era for Irish rugby, leading them to three Six Nations titles and to number one in the world rankings during his six years in charge.

His aim, however, was always to help them reach the last four at the World Cup for the first time in their history.

Following a 46-14 pasting at the hands of New Zealand on Saturday, their third successive quarter-final defeat and seventh in total, he admitted that maybe his team had been too obsessed with World Cup success.

"We would have loved to get into the top four," said the New Zealander.

"There are a lot of things these players have achieved and that is the one thing that remains elusive.

"Heartbroken wouldn’t be far away from how I feel and how the players feel now as we decided this was our target and maybe it consumed us a little bit, so we got distracted from our day-to-day."

Ireland had beaten the reigning world champion All Blacks twice in their previous three matches but on Saturday they came up against a side who dominated from the off.

Schmidt's side were never really in the contest and the coach was left disappointed with their showing.

“I said on Thursday that you have to be nailed on to topple them and we weren’t nailed so that is how you get a 30-point differential on the scoreboard,” he said.

“They were stifling and they made it very hard for us to breathe.”

Since reaching world number one in 2018, Ireland have failed to maintain those heights, losing to Wales, England, Japan and now New Zealand this year.

“I do think that when you hit a height there is always a little bit of a drop because it is not perfect... we work with human beings,” he said. 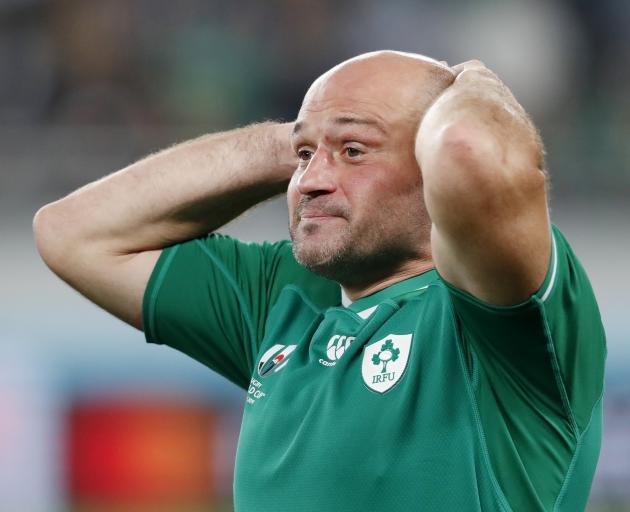 A dejected Rory Best after the match. Photo: Reuters

Captain Rory Best, making his final appearance in an Irish jersey after earning 124 caps, struggled to hold back the tears, saying  the pressure to reach the last four had maybe taken its toll.

"Maybe you put too much pressure and maybe we have been looking at this for too long so we got too focused on it and so we forgot to win the little battles over the past 12 months,” said the hooker.

"We wanted to set a bar no Irish team had done before... it would have been important for us to win a quarter-final as it then makes it a habit.”

The 37-year-old, who made his test debut off the bench against the All Blacks in 2005, announced in April he would retire from professional rugby.

Ireland have a habit losing in the last eight, and their latest failure made for an emotional night, marking the end of an era for the side.

“We are very disappointed. You often don’t get a changing room that is deadly silent, with big men in tears. That is what happens when you put heart and soul into everything.

“I am unbelievably upset to think I won’t pull on a green jersey again, unless I am coming out to support.”

Best received an honour guard from both the All Blacks and Ireland players after the final whistle.

All Blacks captain Kieran Read wished him well in his retirement.

"I'd just like to echo what the crowd said about Rory, his fantastic career," he said.

"Mate, you've been a legend of the game so thank you very much for all you've given to this game."