'Everyone watching us now': Joseph full of praise as Japan exit Cup 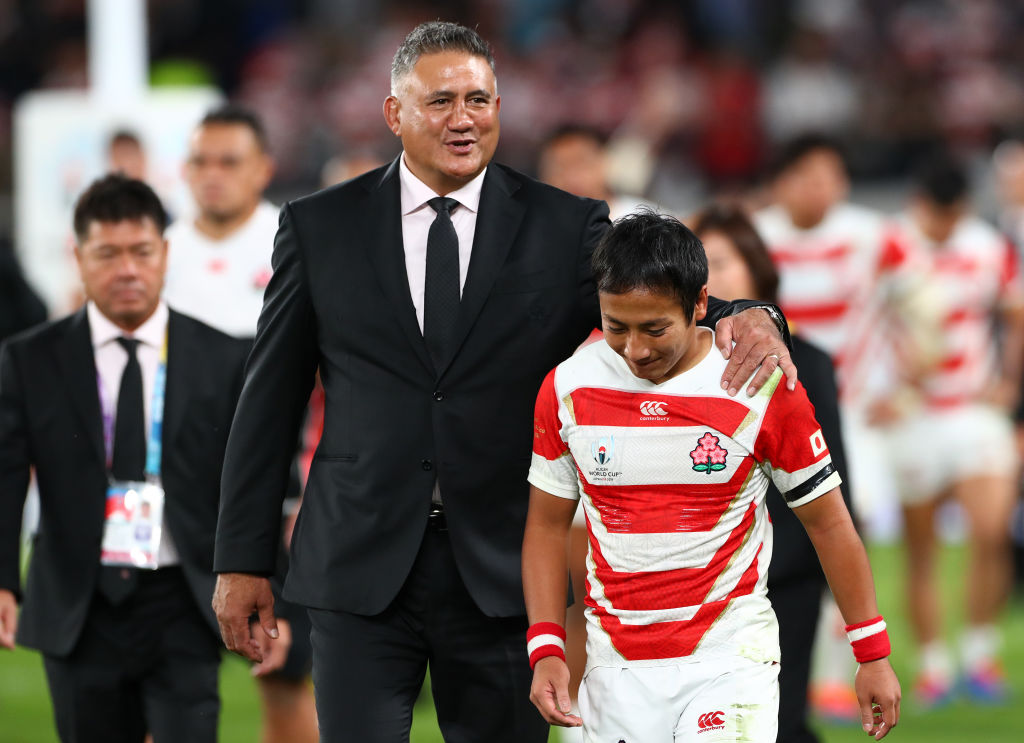 Coach Jamie Joseph with Japan player Yutaka Nagare following their loss to South Africa. Photo: Getty
Despite seeing his team well beaten by South Africa in their Rugby World Cup quarter-final, Japan coach Jamie Joseph was full of praise for his players and hoped they would be remembered as a source of inspiration throughout the country.

Sunday’s clash in Tokyo was Japan’s first-ever World Cup knockout match and expectations of an upset were high following four wins from four in the pool stage, achieved with a brand of attacking, rapid rugby that electrified their fans.

Over 50 million people watched their final pool match against Scotland and even more are expected to have tuned in on Sunday.

Although disappointed by the 26-3 defeat, Joseph had only words of praise for his bruised but courageous players.

“I am going to celebrate the efforts and achievements of this team. There has been a lot of work from a lot people, and it has been relentless,” said Joseph, who took over as head coach in 2016.

“All the credit to the team effort, because that is who we are, that is how we operate and… you can’t acknowledge one person because it has been a real effort and having the country behind us has added to that.”

South Africa, who take on Wales in the semi-finals, were simply too experienced and powerful for the Brave Blossoms on Sunday, with their suffocating defence stifling Japan’s free-flowing game.

However, it was his team’s relentless effort in the final stages, despite knowing they were going out of the World Cup, that most pleased Joseph.

Japan battled on, despite a couple of players carrying injuries, including props Jiwoon Koo, Keita Inagaki and flyhalf Yu Tamura.

“The last five minutes of the test match epitomised this team. We were down by 20-odd... but we showed a never-die attitude and an ability to keep on getting up,” said Joseph, who revealed the influential Tamura had been playing with broken ribs for much of the match.

“Despite us having some broken ribs in there… having that willingness to never lie down is something I am incredibly proud of as their coach. That is the sort of thing that will help us going forward.”

Nobody has epitomised Japan’s relentless energy on the field - and charm off it - than captain Michael Leitch, who cut a forlorn figure afterwards.

“I am not fulfilled or satisfied, just proud to be a member of this team,” he said. “I told (the players) to keep their chins up, we don’t have to look down... for the future we have to maintain this same attitude.”

If Japanese rugby can build on the success of the Brave Blossoms at this tournament, then the future could be very bright for a nation that has now won seven of their last nine World Cup matches.

“The players and the brand of rugby we have been playing has always been inspiring but the difference is everyone is watching us now,” said Joseph.

“It is the same as we have been playing in the PNC (Pacific Nations Cup), the rugby hasn’t changed but the opposition has changed, the pressure has changed and, with it being the World Cup, it has created a lot of noise for the team.

"So in that regard, for promoting the game to Japanese kids, it has been ideal. They would be the right words.”