Imperfect win for Springboks over Namibia 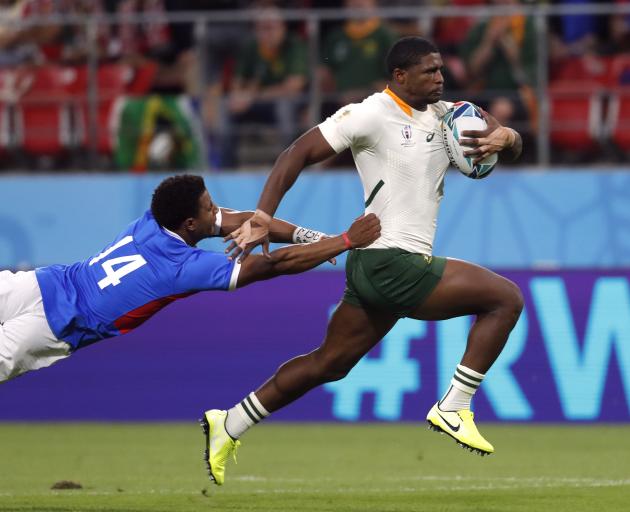 South Africa coach Rassie Erasmus says a five-point haul and a run-out for his whole squad are the positives from Saturday’s scrappy 57-3 Rugby World Cup Pool B win over Namibia as he turns his attention to a must-win clash with Italy on Friday.

The Springboks ran in nine tries against a Namibia side largely made up of amateurs and, while Erasmus believes they did not show the dominance on the scoreboard some might expect, he was satisfied with the result after an opening 23-13 loss to New Zealand.

"I know it wasn’t a wonderful performance, but it was a good one and I think the first 50-pointer of the World Cup," Erasmus told reporters.

"We got the win and the five points, which was important. It was awful looking at the (Pool B) table and seeing us there with zero points.

"But at the same time, we are by no means thinking all is well now, we know where we are and what we still have to do.

"Now it is on to Italy, which is almost like a playoff game and we need to win it."

Every member of the Bok squad has had minutes on the pitch in the opening two games and Erasmus believes this is important to make all the players feel part of the tournament.

"It’s tough when you are a group of 31 players and only 23 play in the first one or two big games, and the others have to just be the opposition (in training), holding the tackle bags and trying to be positive all the time," he said.

He added that the Namibia game will have made his fringe players ‘battle-ready’ should any be called in to face Italy because of injury.

"Tactically, we may not have been challenged in this game, but physically we were. A lot of people may point a finger and say it wasn’t a great performance, but for us at least it was a physical challenge.

"Now we have some match fitness and some log points out of this, which means we are a little bit better prepared for Italy next week."

Erasmus was also quick to point to the improvement of many so-called lesser teams in the tournament, including hosts Japan, who stunned Ireland 19-12 in their Pool A match earlier on Saturday.

"Ten or 15 years ago, Namibia might have got 100 points (scored against them) in the World Cup, there were a lot of big scores," he said.

"Japan conceded 100 points (145-17 versus New Zealand) in the 1995 World Cup, so there is a definite improvement. They are now beating teams like us and Ireland."