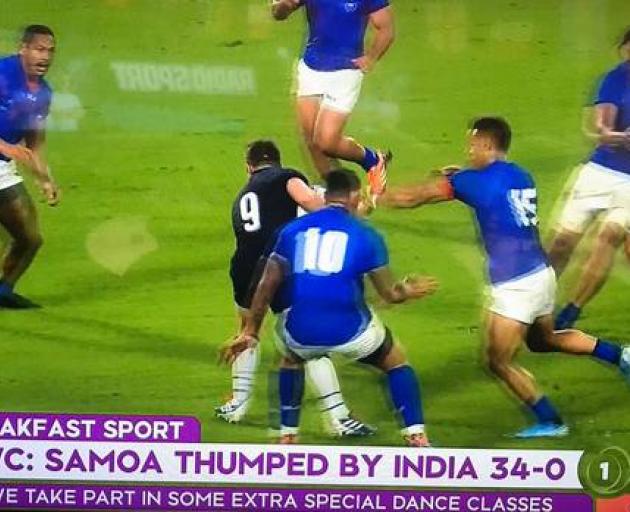 Indian rugby fans would have got a shock if they tuned into TVNZ's Breakfast show this morning.

First, they would have had the impression the India side were playing at the World Cup, and not only that but they'd pulled off a big win over Samoa.

A graphics error on the show wrongly stated 'Samoa thumped by India 34-0'. It was in fact Scotland who defeated Samoa in their pool A match-up in Kobe City.

India, who played their first ever test in 1998, are 86th in the World Rugby rankings and didn't qualify for the tournament, failing to get out of Asia Rugby Championship Division 2.

The side did however recently break a six-game losing streak with a 42-12 win over Indonesia.

Scotland are the current holders of the Calcutta Cup, which they contest against when they face England. It's one of the oldest trophies in rugby and was created in India.

This is not the first time TVNZ has been caught out with a graphics error during Rugby World Cup coverage.

Talofa #Sparksport I know u guys busy trying to suss your streaming challenges, but that's not our Samoan flag. That's the flag of Tonga. pic.twitter.com/pCBSDP5WaW

In the pre-match coverage of Russia v Samoa on TVNZ last Tuesday night, the Tongan flag was used to represent Samoa in a graphic.

When the mistake was pointed out to Spark on social media, the company and TVNZ quickly responded with an apology.

A Spark spokesperson told Stuff that it was a one-off mistake as the other graphics had the correct flag.

"We apologise to any Samoa fans who were upset by this mistake."

Many social media users expressed their disappointment over the blunder.

"I know u guys [sic] busy trying to suss your streaming challenges, but that's not our Samoan flag. That's the flag of Tonga," one Twitter wrote.

One asked: "Is it really that hard to distinguish the difference between Samoa and Tonga let alone their flags?"