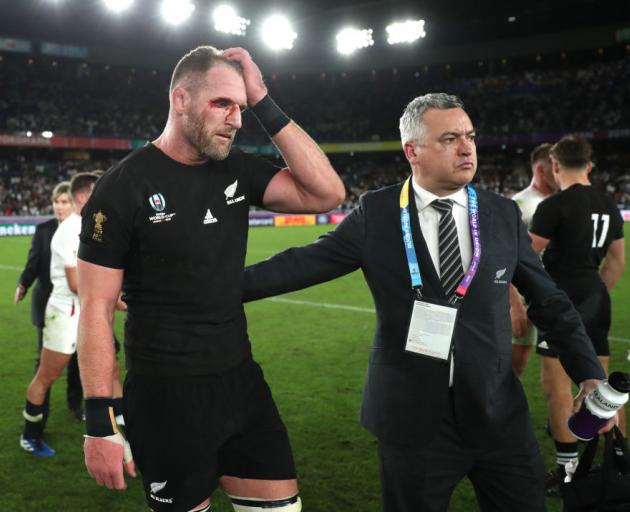 Kieran Read won't get to experience what it's like to lift the Webb Ellis trophy as All Blacks captain. "It's hard to put those feelings into words," he said straight after his side's defeat to England at Yokohama Stadium last night.

Read, who occasionally had a catch in his voice as he fronted the media, added: "To be honest it's gutting - it's a hard thing to take."

He now has the unenviable task of preparing for the third/fourth playoff next Friday, a booby prize if ever there was one - the All Blacks' opponents either Wales or South Africa. As 34th birthdays go, this will register as a flat one if he cares to look back on it.

After next weekend this is the end for Read and coach Steve Hansen as both are heading offshore and quite possibly here in Japan, with Toyota said to be at the head of the queue. It's a sad way for them to finish, but, at the risk of repeating what is likely to be said from both over the coming days, that's sport.

Blood streamed from near Read's right eye in the immediate aftermath of this defeat – a testament to his commitment but also the physicality of the English. They got on top and never relented, and it may take some time for Read and the rest of his teammates to deal with that given the pride they have in their forwards' confrontational reputation.

The All Blacks were supposed to have the attacking weapons and ambitious game plan to beat allcomers and in fact change the game itself. The big problem, unfortunately for them, was that they couldn't get their hands on the ball to do much of anything significant.

England had the better attack and they certainly had the better pack. They may have also had the more damaging No 8 in Billy Vunipola, who didn't take a step back for the haka and refused to once the game began too.

"Look I'm sure they're disappointed," Read said of the All Blacks' fans at home. "That's how we're feeling in that shed. We gave our all, as much as we had and just came up short. We're extremely disappointed by that but right now it's hard to put those feelings into words."

Of the challenge to the haka – the reverse arrow formation that had Joe Marler and Vunipola as twin provocateurs: "It had no impact on the game," Read said. "That's what they wanted to do and that's what they did.

"They dominated that breakdown," he added. "They did a fantastic job. We couldn't get quick ball and that was the difference. We were chasing the game. They did their job.

"I think we did. You saw how hard we worked. The boys really wanted it. The detail of the match probably didn't go our way but our workrate was there. Even in the first half we conceded and came back and hung in there. To be honest it's gutting - it's a hard thing to take."

Attack coach Ian Foster, who saw his strike weapons Sevu Reece, George Bridge and Beauden Barrett effectively nullified, said: "I think they did a great job in that area. You could see tonight they came forward and targeted certain areas. You really need to get a lot of opportunities to try to break them down. We weren't far away but they defended with energy and passion. I have to congratulate my mate Mitch [Kiwi defence coach John Mitchell] - they did a very good job."