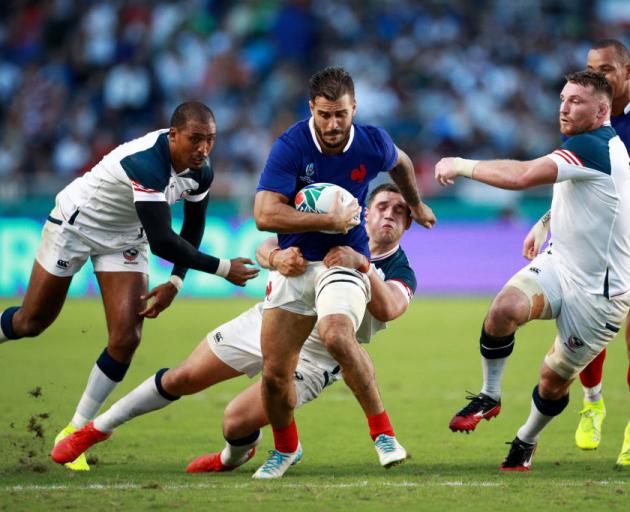 Sofiane Guitoune of France is tackled during the Rugby World Cup 2019 Group C game between France and USA. Photo: Getty Images
France coach Jacques Brunel lamented an error-strewn display as his team made heavy weather of the United States in humid Fukuoka at the Rugby World Cup on Wednesday but praised his bench for changing the game and securing a bonus point.

Having needed a drop goal from substitute flyhalf Camille Lopez to edge past Argentina in the first Pool C clash, the French this time relied on scrumhalf Baptiste Serin who came off the bench and helped avert disaster in the 33-9 win against the Eagles.

With a third penalty bringing the U.S. to within three points of the French score 15 minutes from time, Serin set up a try to Gael Fickou to relieve the pressure and then scored one of his own as Les Bleus at last hit top gear against their wearying opponents.

It put the gloss on a typically see-saw performance by the three-times finalists, and Brunel was happy his team emerged with maximum points.

"Physically, it was difficult, it was very humid, and we felt the humidity. But the positive is we won," he told reporters.

"We gave away many penalties which we should have avoided. In the maul, there were many problems.

"For the previous match and this match, our substitute players changed the match. They really performed well."

With a short turnaround before France's next game against Tonga on Sunday, Brunel had opted to make 12 changes on Wednesday to the starting side that played against Argentina.

Barring the deft kicking of flyhalf Camille Lopez, they looked very much a 'B' team for large periods. Passes flew wide of target, balls were spilled and the French, giving up 10 penalties to the U.S.'s four, were lucky not to receive a yellow card for repeated infringements when camped on their try-line.

"We respected the opponent and it was not an easy match to play," backrow enforcer Louis Picamoles, who stood in for benched captain Guilhem Guirado, told reporters.

"It didn’t work as well as we thought it would. In the first half we made so many mistakes, but we weren’t panicking.

"There are so many tasks that we need to work on but we are able to improve."

The win put France second with nine points behind England's 10 in Pool C. Brunel was keeping his eyes firmly focused on Tonga, however.

"The next match is against Tonga, not England, and Tonga gave England some difficulty," he said of the Pacific islanders, who were beaten 35-3 in their first match against the English.

"Tonga showed a lot of quality so we cannot look ahead to England."