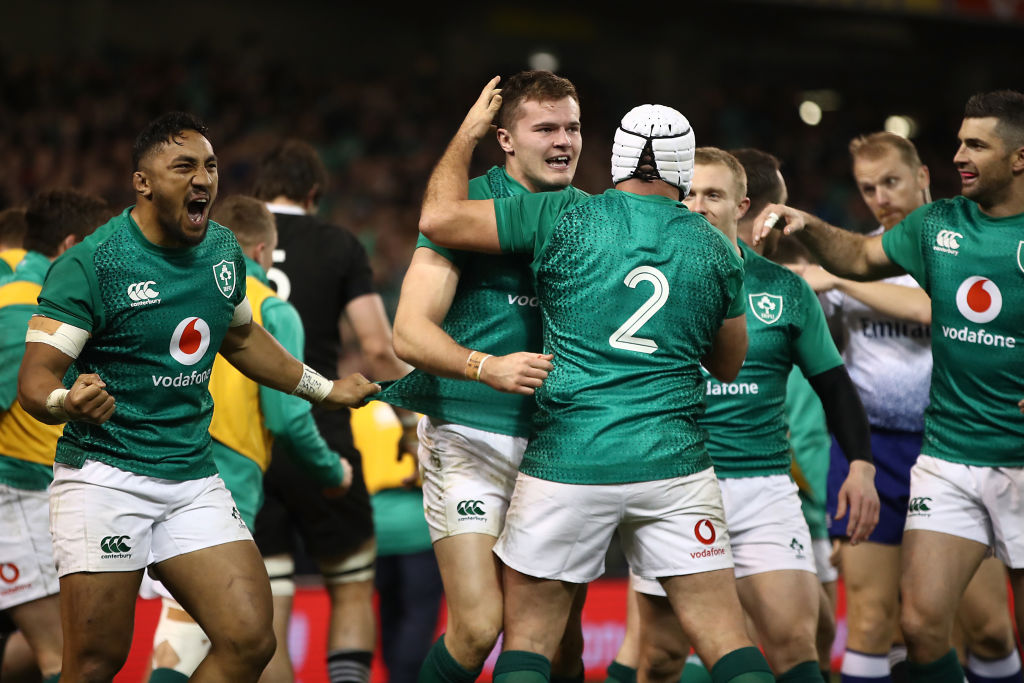 Is there more of this on the way for the All Blacks? Photo: Getty
A top New Zealand pundit is picking Ireland to beat the All Blacks in the World Cup quarterfinal, although there is a catch.

Gareth Dinneen from 1014 Rugby – whose analysis features on Spark Sport's World Cup coverage – came to New Zealand from Ireland nearly 20 years ago. His broadcaster dad Len was known as Ireland's 'Voice of Rugby'.

Gareth Dinneen believes the influence of Ireland's defensive coach Andy Farrell will make the big difference in the Tokyo clash, and that for Ireland this is their final.

Here is the quarterfinal analysis from Dinneen and his 1014 Rugby co-founder Steven Prescott, as they told it to the Radio Sport Breakfast.

I think England are going to do it, they've played each other a lot since the last World Cup and Michael Cheika has never beaten Eddie Jones. The last time Australia beat them was in the pool of death at the last World Cup.

Tactically where this gets very interesting involves the halfbacks around the ruck. Wales hammered England during the Six Nations, on the field if not on the scoreboard, by playing a pick and go game off nine, Wales haven't played that way since.

A lot of the times when Australia are successful against the All Blacks it's all around the ruck…the halfback attracting the third defender out from the ruck and Michael Hooper and a few of his backs taking angled lines off that. It's a massive part of the game that Australia are good at, and an area where Wales got at England.

But I think England's kick game is too good, their forwards are too big, they're too dominating. I think they are going to roll them over.

They've never got past the quarterfinal of a World Cup. The IRFU tasked Joe Schmidt in writing to get into the semifinal. Not win the Six Nations or anything else.

Not even the final. The semifinal – getting there is a victory for Ireland in this World Cup. So we think differently to you guys. It's been a glass ceiling we can't break.

Two opposite teams…maybe one of the best defensive teams in the world against THE best attacking team in the world.

New Zealand like to play with a lot of width. Ireland do not like to get outside the 15m lines in attack or defence.

You'll see the Ireland defence give a massive amount of space outside the 15 metre lines, offering it to New Zealand. Ireland will challenge New Zealand to get it out there with their line speed.

Remember Andy Farrell, the Ireland defence coach, has beaten New Zealand for the Lions, England and twice with Ireland. Ian Foster was asked about him at a press conference and he gave a bit of a prickly answer – he didn't seem to like it.

I'm very emotional about this. I've got two kids and one will be shouting for New Zealand and the other for Ireland. I can't predict with anything else than my heart – Ireland are going to win this one.

This is the most one sided quarter-final based on world rankings…Wales are at two, France are at eight.

France have beaten Wales once since the World Cup in 2011, Warren Gatland has the French number and I can't see it going any other way. The French would have to turn up and do to Wales what they have done to New Zealand at a couple of World Cups.

Wales play numerous types of games – they can go wide, wide or play close to the ruck. They annihilated England in the Six Nations –maybe not on the scoreboard but on the field they did. So you just don't know – Gatland is a very smart rugby coach.

Wales came back form 0 – 16 down against France in the opening Six Nations match this year to win 24 – 19 in Paris. Don't underestimate winning away in Six Nations – that is a massive result. Ireland have only won three times in France since the war. Wales know what they are doing against France.

Wing Josh Adams came out of nowhere – he is a weapon. His finish against England in the Six Nations was the stuff of boyhood dreams. They've got firepower and presuming Alun Wyn Jones is fit, they've got the king of Wales.

I can't see it going any other way.

It could be the most enterprising quarterfinal…on rankings this is the closest match with only two world rankings between them. Who would have thought that?

You can't see it going any other way than South Africa, but you would have said that when Japan played Ireland.

Japan play beautiful rugby and they are one of only four teams in the quarters to have passed more than 200 times in any match, and along with the All Blacks the only team to have done it twice. They did it against Tier One nations, so their ball skills are incredible.

It's going to be a matter of whether they can get front foot ball. They've got that zero second ruck they are playing with or very, very quick ruck speed.

The South Africans are experts at slowing the ruck down. We found some incredible stuff that Scotland were trying to do to slow the ruck down against Japan and they were having some success. I would expect South Africa to have even more success.

And then you have the size of the South Africans which just cannot be underestimated. They are monstrous human beings - giants.

If the Japanese run as high as they have been the South Africans will just hold them off the ground and take them to scrum and set piece, kick them into the corners and grind them down. If Japan won this game it would be the biggest upset in World Cup history.