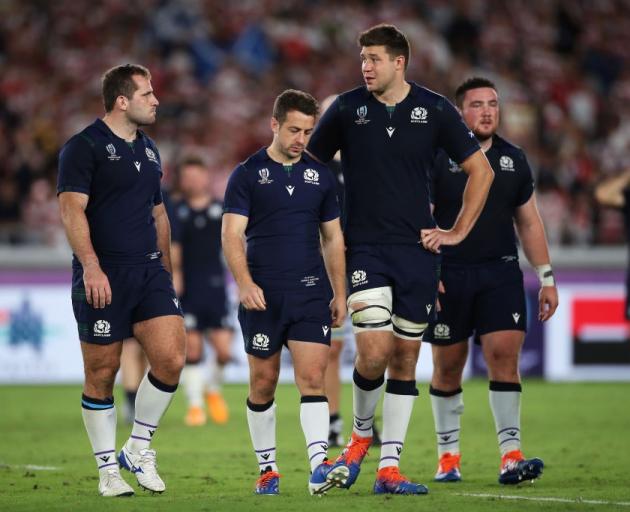 Scotland players Fraser Brown, Greig Laidlaw and Grant Gilchrist walk off the field after losing to Japan in the Rugby World Cup. Photo: Getty Images
The Scottish Rugby Union (SRU) has been fined $NZ141,000 and told to apologise for comments made during the Rugby World Cup.

Those were in relation to the possible cancellation of their match against Japan in Yokohama due to Typhoon Hagibis.

Three World Cup pool matches were cancelled and Scotland's decisive game with the host nation was in doubt for several days due to the impact of the typhoon, which led to the deaths of more than 80 people and caused massive flooding.

SRU chief executive Mark Dodson had threatened legal action if the match did not go ahead, saying that the decision "was not just".

He also suggested that New Zealand might have been treated differently in the same situation and said that Scotland were "winners in the court of public opinion" on the matter.

A World Rugby independent disputes committee ruled on Thursday that the comments constituted misconduct, fined the SRU, formally reprimanded the union and said it should issue a "meaningful apology" to World Rugby.

"World Rugby strongly believed the comments, which suggested an unfair and disorganised treatment of all teams, to be inappropriate and ill-judged at a time when Japan was preparing for the largest and most destructive typhoon in decades," the game's governing body said in a statement.

"The international federation believed that such comments brought the game into disrepute, not only in relation to World Rugby’s handling of an extraordinary situation, but also in the message that it sent to the Japanese people."

World Rugby said that it had tried to settle the issue but that SRU refused to issue an apology and instead wanted to agree to a "mutual expression of regret."

The match did go ahead, with Japan claiming a famous 28-21 victory that sent them into the quarterfinals and eliminated the Scots.

The fine will be donated to the Childfund Pass it Back charity, assisting with the relief effort in the area hit by the typhoon.