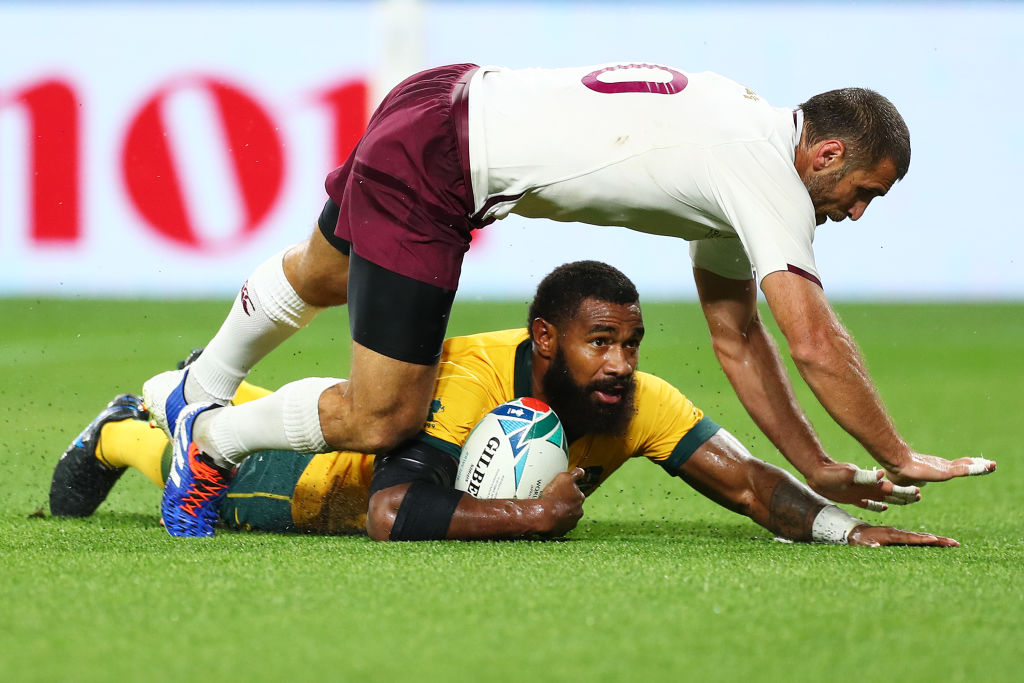 Georgia's Lasha Khmaladze can't stop Marika Koroibete scoring a try for Australia. Photo: Getty Images
Australia made heavy work of it in difficult conditions but outlasted a tough Georgia team to round out their Rugby World Cup Pool D campaign with an unconvincing 27-8 victory at Shizuoka Stadium on Friday.

The wind and persistent rain presaging Saturday's arrival of Typhoon Hagibis made for an untidy contest in Fukuroi City but the Wallabies did just enough to ensure they will top the pool if Wales slip up against Uruguay on Sunday.

That is highly unlikely but with England therefore looming as Australia's quarter-final opposition, a run-out against a big physical tier-two team was as good a preparation as coach Michael Cheika could have wanted.

England will have little to fear from the Wallabies on this evidence, however, as the twice World Cup winners stumbled rather than cantered into the knockout stages.

"I wanted the forwards to get a good hard hit out. We know it will be a big contest next week in the forwards so those parts of the game were important," Cheika said.

"Now we're in the knockout stages we have to keep building now we're here. I think we're getting a platform but we need to be sharper in attack."

Australia's hopes of a first fast start of the tournament were quickly quashed by a steely Georgia defence which had already made 100 tackles before halfback Nic White nipped over the line to open the scoring in the 23rd minute.

No more tries were to follow before the break but Australia's problems with the high tackle did return in the 35th minute when No 8 Isi Naisarani was sent to the sin bin for an arm into the face of Georgian lock Giorgi Nemsadze.

Soso Matiashvili and Matt To'omua exchanged penalties to give Australia a 10-3 halftime lead but their frequent handling errors hampered their efforts to break clear at the start of the second half.

In the end, it took a dazzling individual effort from Marika Koroibete to make the second-half breakthrough with the big winger weaving his way past four defenders to touch down on the hour mark.

Georgia were not done yet, though, and winger Alexander Todua got the biggest cheer of the night from the rain-drenched crowd when he tore down the left wing to score 10 minutes from time.

Loose forward Jack Dempsey and scrumhalf Will Genia crossed for tries in the last five minutes to earn Australia a bonus point they did not need and add a bit of respectability to the scoreline.

Australia's win means Gorgodze heads into retirement without the win over a tier one team he so coveted and captain Merab Sharikadze said they would need to improve in attack if they were to achieve it.

"We fought well," the centre said. "Hopefully in the future we can be more productive in attack as well.

"You can't win the game unless you score more points. Yeah we had really good defence and I am proud of my team but we need to improve a lot."