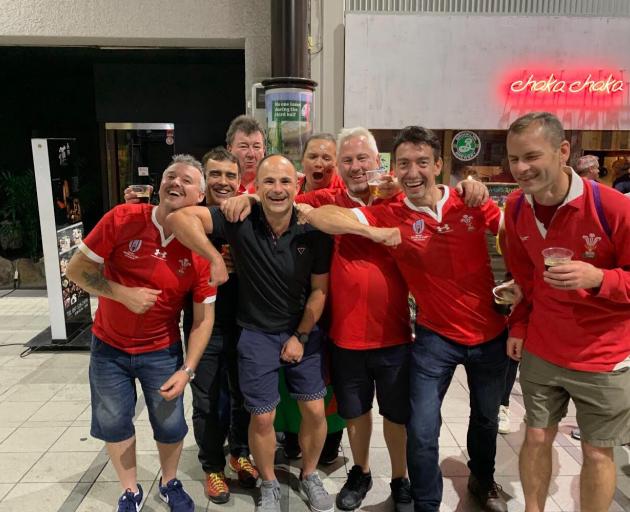 The South Africa referee could miss out on being an official in the final four matches of the tournament with World Rugby saying they are aware of the picture.

Wales coach Warren Gatland has defended the actions of Peyper however, calling it 'bit of a joke'.

With France leading 19-10 in Oita, Peyper showed a red card to French lock Sebastien Vahaamahina for an elbow to the head of a Welsh player.

The incident ended up costing France as Wales produced a comeback to book a place in the semifinal with a 20-19 victory.

But just hours after the game, Peyper has landed in hot water after a picture emerged on social media of the referee appearing to mock Vahaamahina's elbow shot by posing alongside jubilant Welsh fans.

The 39-year-old official is seen smiling for the camera with his elbow raised, mimicking the game-changing red card.

In a press conference ahead of Saturday's semifinal against South Africa, Kiwi Gatland said too much had been made out of it.

"He's [Jaco] had his 50th cap and he's posing with a few fans, making a bit of a joke about an incident in the game. How people interpret that is up to them. Obviously, the way things are and how PC everyone is, people like to make mountains out of molehills. And that's how I view the situation at the moment," Gatland said.

World Rugby has said it was aware of the picture and "it would be inappropriate to comment further while we are establishing the facts", AP reported.

The officials for the semifinal matches will be announced at 5pm NZT.

Fans weren't happy with the photo, with some even calling for Peyper to be canned for the rest of the World Cup.

"As much as Vahaamahina deserves his red card, Jaco Peyper deserves to finish officiating in the World Cup after that. He can celebrate his match but this joke is unworthy of a referee," one fan wrote on social media.

Another said: "If this photo is not a fake, it is particularly disturbing".

The 48th minute red card, which was the biggest talking point of the match on Sunday, was less controversial, with replays showing the French forward clearly elbowing Aaron Wainwright in the face during a maul.

The incident was reviewed by the TMO and Vahaamahina was dismissed after a quick deliberation among the match officials.

The second-rower has since apologised to his teammates in a tearful changing-room address.

Wales will face South Africa in the semifinal after the Springboks ended Japan's fairytale run in the tournament in Sunday's second match.