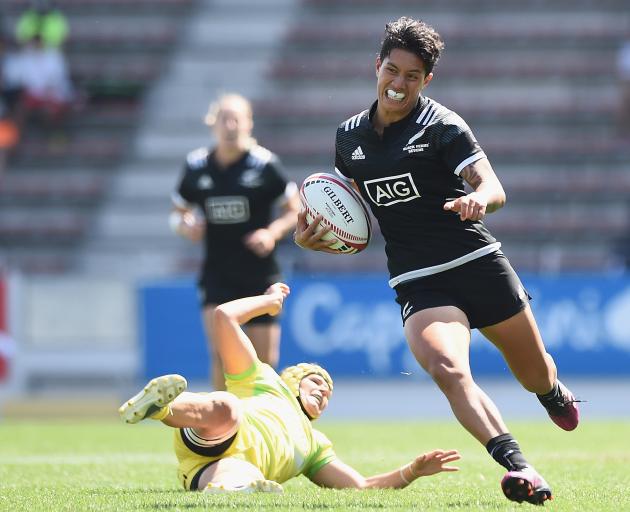 Gayle Broughton of New Zealand makes a break and scores a try during the Cup semi-final between New Zealand and Australia. Photo: Getty Images
A dramatic semifinal comeback over Australia has spurred New Zealand to victory in the Japan leg of the Women's Sevens Series.

The defending champions came from 12-0 down to topple Australia 17-12 in a repeat scoreline of the Commonwealth Games finale, and then overcame France 24-12 in the final to take their first title of the 2017-2018 series.

New Zealand have hit their stride halfway through the season, claiming gold at the Commonwealth Games, before racking up 198 points in six games on their way to their Japanese jubilation.

While the French were the last team standing, it was Australia who were always going to be their main foes, and a second half comeback kept their realistic hopes of overall series glory alive.

After going down 12-0, a try in first half added time from Gayle Broughton put New Zealand back in touch against their arch rivals, and they dominated the second spell. A Michaela Blyde try got them back in the contest, and Tyla Nathan-Wong sliced the Australian defence apart with 90 seconds remaining to seal the win.

They followed up the dramatic victory by dispatching France in the final, who had earlier seen off the surprise package, Spain, in the semifinals.

New Zealand have never lost to France in 20 clashes, and a try to Blyde after just 38 seconds set them on their way. France levelled the scores through Camille Grassineau, but some fancy footwork from Theresa Fitzpatrick put New Zealand back on top before the break.

Their path to victory was complicated when Broughton was yellow carded for a deliberate knockdown, with France taking full advantage through a close range snipe from Montserrat Amedee.

With three minutes to go, France sensed an upset, but as has happened so often before, a moment of magic from Portia Woodman made the difference. Woodman got on the outside of the French defence, sprinting 80 metres to score, before – as she did in the semifinal - Nathan-Wong sealed the deal with a superb late effort.

"It's been an amazing couple of weeks," said Nathan-Wong.

"We've had some adversity with girls getting injured but all the credit to the girls - we played amazing."

With the women's world series only consisting of five tournaments, an Australian win would have put them in a near-unassailable position after winning the first two legs in Dubai and Sydney. However, with New Zealand taking 20 points for a win and Australia 16 for finishing third, they have cut the gap to just six points.

New Zealand will still need Australia to falter if they are to defend their title, with tournaments in Canada (May 12-13) and France (June 8-10) set to decide overall honours.