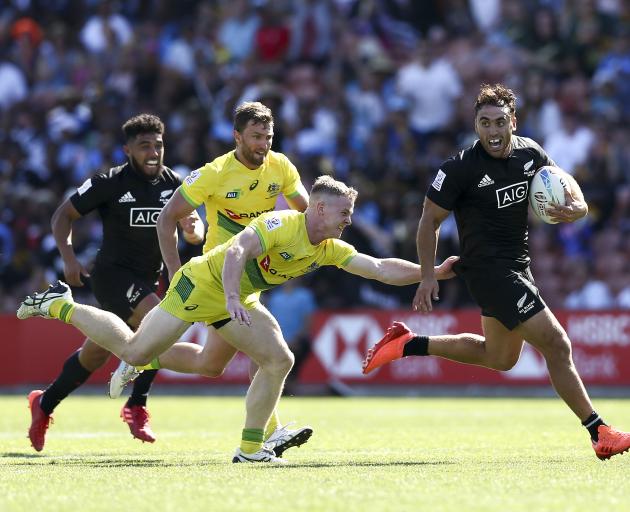 Joe Webber of New Zealand gets away from Henry Hutchison of Australia during the semi-final match between New Zealand and Australia at the 2020 HSBC Sevens at FMG Stadium Waikato in Hamilton. Photo: Getty Images
The All Blacks Sevens hadn't won the New Zealand leg of the World Sevens Series in the two years it had been in Hamilton.

And with the event moving elsewhere in New Zealand for 2021, they were running out of opportunities.

But playing alongside the women's event for the first time in New Zealand, it seemed only fitting for both Kiwi teams to take out their respective titles.

The All Blacks Sevens overcame a tough French team to do so, claiming a 27-5 win after the Black Ferns Sevens' 24-7 win in their final against Canada.

After seeing off Wales, Scotland and the ever-dangerous USA, the All Blacks Sevens took out a tough semifinal clash against Australia to book a final against France. 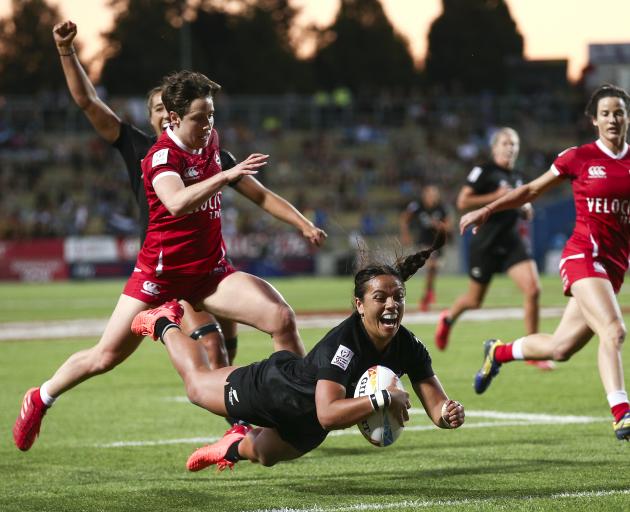 Stacey Fluhler of New Zealand scores a try during the Cup Final match between Canada and New Zealand. Photo: Getty Images
In their first final on New Zealand soil, France provided a strong challenge but a yellow card for a neck roll on halftime opened the door for the hosts to build a 12-5 lead at the break with tries from Scott Curry and Regan Ware.

But while they fought valiantly in the first half, the second belonged to the Kiwis, with Vilimoni Koroi scoring before Curry crossed for two more to seal a hat-trick, the win and a double for New Zealand.

The win sees the All Blacks Sevens extend their lead at the top of the leaderboard, building a handy lead after South Africa, who were second coming into Hamilton, finished 10th in Hamilton.