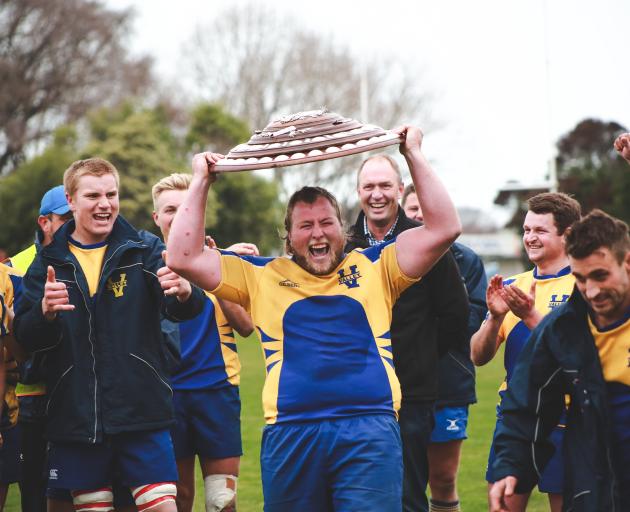 Valley forward Logan Dunlop is all smiles after his side won the Citizens Shield last year. PHOTO: REBECCA RYAN
The North Otago club competition kicks off tomorrow and for the second season in a row there is a real lack of imports.

Players from overseas have propped up clubs in the past few years, but with the borders closed the sides have been forced to look within or get players from outside the region but within New Zealand.

There will be the usual six sides lining up for the major competition, the Citizens Shield.

The feature game of the day will be between last season’s winners, Valley and Athletic Marist.

There was a pre-season warm-up tournament in Oamaru last week which had shortened halves and plenty of players coming on and off.

Valley did not participate in the warm-up tournament and neither did Kurow. The Kurow club had organised a pre-season game at home against Ashley to raise finance for its new lights on the ground.

Old Boys, which always plays an aggressive, mobile style of rugby built on pace, power and a strong support game, won both of its games defeating a young Athletic Marist side 14-5, and Excelsior 12-0.

Maheno, which fielded a potentially powerful forward pack, beat Athletic Marist 12-7 and then went down to Excelsior 7-0; Excelsior’s mobility gave it the edge.

A youthful Athletic Marist side lost three games: to Old Boys, to Excelsior, and then the narrow loss to Maheno.

On opening day, Valley will meet Athletic Marist on the main ground in Oamaru, while over on No2 ground Excelsior will play Old Boys. Both games are scheduled for 2.45pm.

Kurow will host Maheno in Kurow at 7pm on Saturday under the new lights.

The day at Kurow will start at 4.30pm with the presidents grade team taking to the field, followed by the official opening of the lights at 6pm.

The lights have been on the radar for the club for more than a decade, but some solid fundraising over the past three years have led to the lights all set to be turned on tomorrow night.

Kurow is looking for a good win over Maheno, but it will not be easy.

There have been the usual comings and goings around the clubs, and most clubs will be somewhat rusty. Fitness may be lacking in some areas.

The format this year has two full rounds.

In the top four playoffs, the top two sides will play each other, and the winner of that game will go straight to the final.

The third- and fourth-placed teams will also play each other; the winner of that game will face the loser of the top two game for the other place in the final.

The final will be played on July 24.