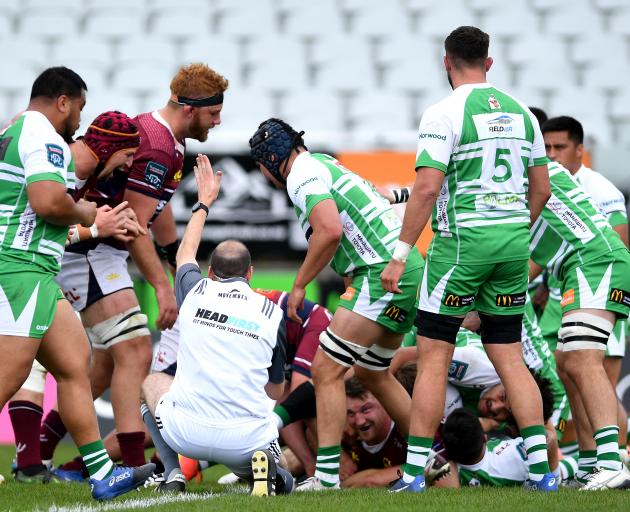 The Stags dominated large chunks of the game, especially over the first hour, but faded badly as the visiting side claimed a 38-27 win.

That made it five straight losses to start the season for Southland, which perhaps lacked the depth and the nous to close out the game when it seemed to have it in hand at one stage, leading 20-6.

Manawatu was quite dreadful for the first 39 minutes but, crucially, scored right on halftime then again early in the second half, and seemed to lift a couple of gears when some good players came off the bench.

The ageless warrior was quite brilliant in the first half, kicking goals and making a gliding break that led to the opening try, to captain Tony Lamborn, and making an ingenious decision to take a quick tap that completely fooled Manawatu and set up a Solomon Alaimalo try.

With tighthead prop Chris Apoua dominating in the scrum, Alaimalo showing some nice touches and the Stags, as a unit, looking powerful on defence, things were looking bright at Rugby Park.

Even after Manawatu levelled at 20-20, from a sweeping move in the 46th minute, Southland responded with an opportunistic Matt Whaanga try, and the game was anyone’s.

Unfortunately, Banks — who would finish with a kick that went out on the full and a missed penalty — and his team-mates misfired in the final quarter.

Blockbusting Manawatu winger Ed Fidow scored a freakish try, his second, when he somehow held on to a kick at point-blank range, impressive lock Liam Mitchell scored, and Brett Cameron landed three quick kicks at goal to put the game away.

Cameron finished well after an erratic start but the dominant players for Manawatu were loose forwards Shamus Hurley-Langton and Brayden Iose.

The Stags now have the weekend off, as they were due to play Level 3-restricted North Harbour. It remains to be seen how the NPC unfolds after that.

- Hawke’s Bay held on to the Ranfurly Shield 34-22 over Tasman on Saturday.

Tasman was hoping to lift the Log o’ Wood for the first time in the union’s short history but the Magpies never looked like losing.