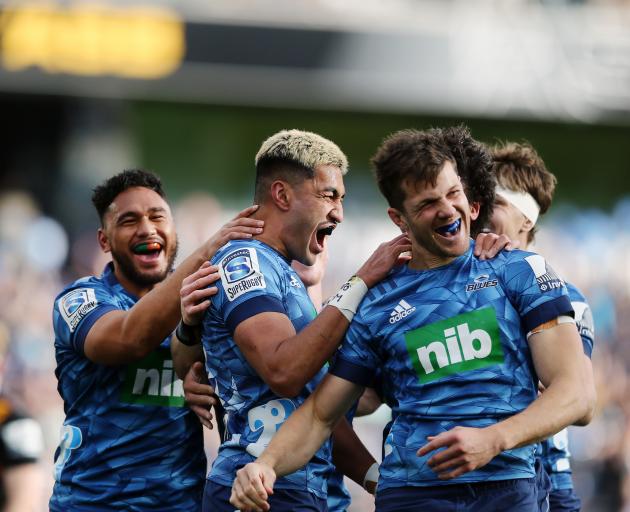 Rieko Ioane and Matt Duffie of the Blues celebrate a try in their win over the Chiefs in Auckland. Photo: Getty Images
A day that was billed around Beauden Barrett's return to first five-eighth instead finished with an unlikely hero for the Blues.

Workaholic lock Josh Goodhue doesn't win many plaudits compared to some of his more illustrious teammates but after coming off the bench to earn a late match-winning penalty he's unlikely to be buying a beer this week.

Goodhue's 78th minute breakdown penalty on his own line allowed the Blues to escape with a narrow, and unconvincing, victory that lifts them to second place in Super Rugby Aotearoa, two points behind the Crusaders, who have a game in hand.

The Chiefs felt they were robbed at the death after No 8 Pita Gus Sowakula went close during a late surge at the line and referee Brendon Pickerill opted not to use technology to check a possible grounding.

After trailing 14-7 at halftime, the Chiefs rallied to have the better of the second half in particular but they will be desperately disappointed not to break their now seven-game losing run which dates back pre-lockdown.

It was ironic that desperate defence and a late penalty saw the Blues escape, as discipline was a major issue throughout this match. They got on the wrong side of Pickerill, conceding a 15-6 penalty count which culminated in replacement backline utility Harry Plummer being yellow carded in the closing stages for repeated team infringements.

That the Blues somehow managed to hold on sets the competition up for an engrossing final three rounds.

Despite strong contributions from Akira and Rieko Ioane, Ofa Tuungafasi and Finlay Christie, Leon MacDonald's men must be much better than this effort in the weeks to come if they are to challenge for the title.

After the Hurricanes and Crusaders set the weekend standard on Saturday night in Christchurch, this match fell somewhat flat with the skill execution well down on previous Kiwi derbies.

Another bumper Sunday afternoon crowd of 33,000 set the scene for the Blues return to Eden Park after two away defeats to the Crusaders and Hurricanes threatened to derail their promising campaign.

Barrett's first start in his preferred first five-eighth role for almost one year did not immediately unleash the Blues' attacking potential. Barrett delivered a solid 65 minutes at first-five, before shifting to fullback after Otere Black's introduction off the bench, but it's fair to say there's more to come if he recovers from a rib injury.

Aaron Cruden's injection at halftime helped spark the Chiefs in the second half. Solomon Alaimalo finished an 80-metre breakout after passes from Cruden and Anton Lienert-Brown put him in space on the outside. Unfortunately for Alaimalo, that was his last act after Caleb Clarke dove on him in the in-goal to injure his arm in the process.

Not long after Damian McKenzie slotted a penalty to hand the Chiefs their first lead of the match, though it would be short lived.

Tuungafasi's bust up the middle of the ruck led to livewire halfback Christie regaining the advantage for the Blues – and they held on grimly from there.

It was all the Blues initially as they settled into an early rhythm. Matt Duffie struck first from a slick set piece scrum move, the fullback hitting a short ball from Rieko Ioane and sprinting away to open the scoring.

Barrett took the ball flat to the line and threatened on occasions with jinking runs but not often enough.

Patrick Tuipulotu gave his men a 14-0 lead in as many minutes when he crashed over and, at that stage, it seemed the locals could run away with the match.

A string of four breakdown penalties against the Blues swung momentum, however, and signalled problems to come.

The Chiefs repeatedly turned down shots at goal in favour of kicking for the corner – first-five Kaleb Trask twice missing touch from these opportunities.

Lachlan Boshier's response closed the margin for the Chiefs but despite controlling much of the possession and setting up camp in the Blues 22 at the backend of the first half they failed to convert that pressure into points.

A lack of clinical finishing and variety to their attack, coupled with strong defence from the Blues with Akira Ioane leading the way, left the Chiefs frustrated heading into the break.

The second half was a similar story for Warren Gatland's side – extended periods of dominance not translating into points to retain their losing habit.

They now trek back down State Highway 1 in the same winless state.