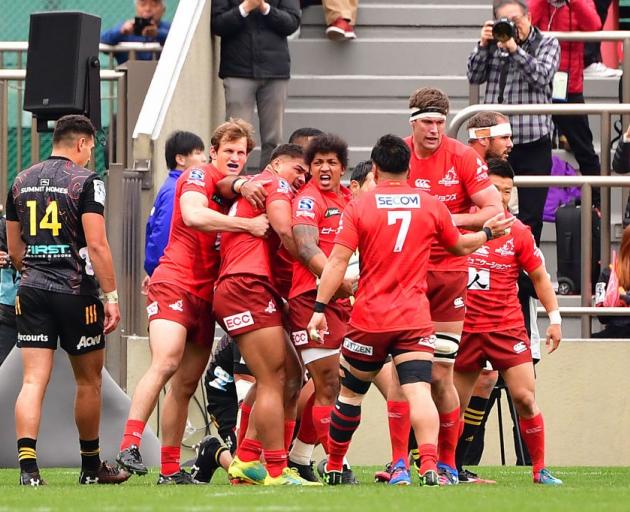 Coronavirus is being carefully monitored in regards to matches involving the Sunwolves in Tokyo. Photo: Getty Images
Coronavirus is threatening to force the cancellation of Super Rugby matches following an outbreak of the disease in Japan while a Six Nations game has been called off.

The men's and women's Six Nations fixtures between Ireland and Italy have been postponed with 11 towns in northern Italy in lockdown due to coronavirus. Set for March 7 and 8 in Dublin the matches are set to be rescheduled.

"We were then advised, formally, that the National Public Health Emergency team has determined that the series of matches should not proceed, in the interests of Public Health. The IRFU is happy to comply with this instruction," The Irish Rugby Football Union said in a statement.

Super Rugby's governing body SANZAAR is closely monitoring the endemic as fixtures involving the Tokyo-based Sunwolves could be in the firing line should the situation escalate.

The news comes after a multitude of sporting matches in Asia and Europe have been interfered with as a result of the spread of coronavirus.

In Japan, football games in the J.League this week have been cancelled, while the table tennis world championships in South Korea have been postponed.

Additionally, Global Rapid Rugby have relocated matches in China to New Zealand and possibly Australia, concerns have been raised about Six Nations clashes involving Italy and World Sevens Series in Singapore and Hong Kong will be now held in October rather than April.

As it stands, 850 cases of coronavirus have been confirmed in Japan which has led to four deaths, prompting serious concerns for given Tokyo will host the Olympic Games later this year.

Consequently, there could be implications for teams travelling to Japan to face the Sunwolves, but SANZAAR has no plans to cancel matches at this stage.

The Japanese franchise are set to play Hurricanes in Napier this weekend before hosting the Brumbies in Osaka on March 8.

SANZAAR told the Sydney Morning Herald that the Brumbies clash is expected to go ahead following discussions with the Canberra-based side regarding concerns about the issue at hand.

"SANZAAR is cognisant of what is happening and taking advice from medical authorities and government but at this stage it's business as usual," a spokesperson told the SMH.

The governing body has been in consultation with the World Health Organisation and is ready to act at short notice if necessary.

SANZAAR will have a board meeting early next month where they will discuss the issue, but news of cancelled matches in the J.League this week and the possibility of matches being postponed until halfway through next month could cause a re-think of Super Rugby's stance on the matter.

The Sunwolves have six remaining home fixtures throughout Japan and Singapore this season.