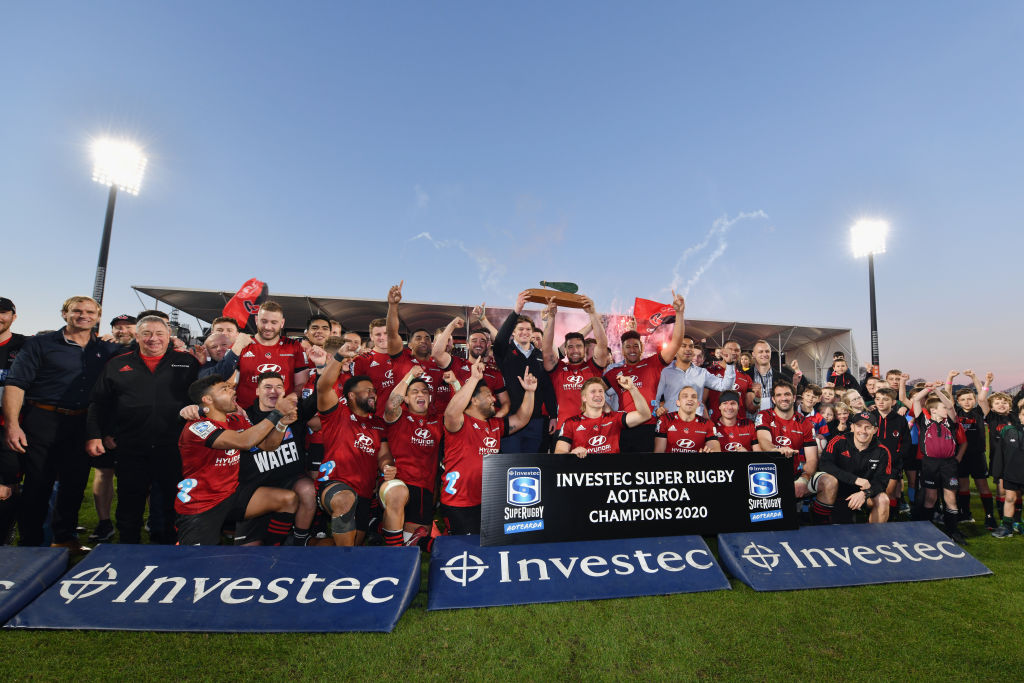 The Crusaders celebrate with the Super Rugby Aotearoa trophy after their win over the Highlanders. Photo: Getty
WARNING: STRONG LANGUAGE

A family member of the creator of the Super Rugby trophy badly damaged by the Crusaders during their title-winning celebrations at the weekend, has launched a stinging attack against the team - calling their excuse "bullshit" and alleging that some of the players took "inappropriate" pictures with it.

Geena Doyle, who claims to be the daughter of Ōtaki carver Bill Doyle, also claims the taonga was used as a doorstop.

"Bullshit dropped it my arse. Sweep it under the table you muppets. I have had so many messages from people I don't know but live down there about what they did with the Pounamu and I believe they took photos inappropriate with it and it was the cleaners that found the pounamu by the rubbish," she posted on Facebook.

"Whether this is true of not WTF aye. I was told also they used this taonga as a doorstop and other things which is so f***** heart wrenching get some balls and own your sh*t. When my Dad gets it back and fixes it he should bloody keep it. You don't deserve it back." 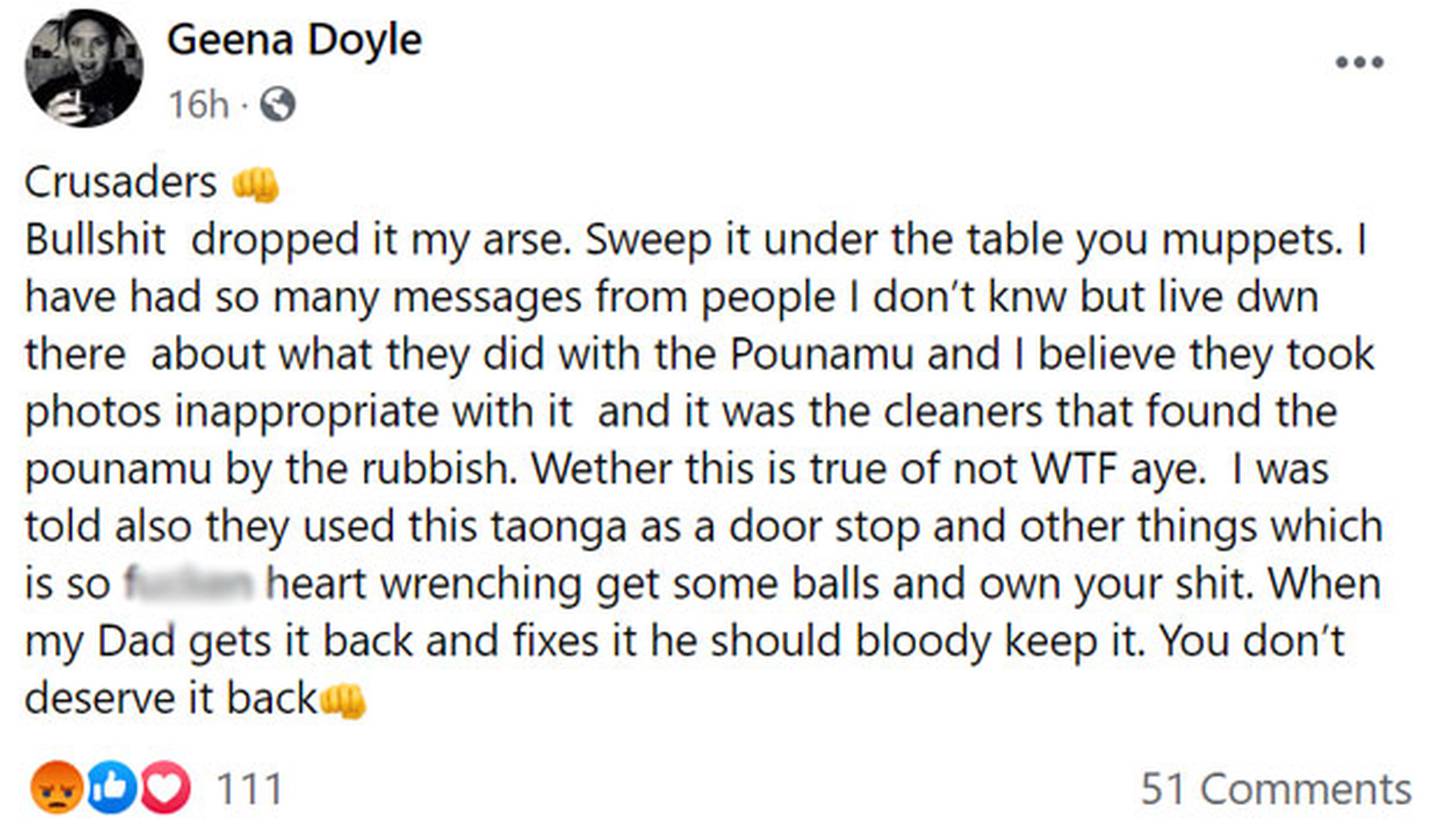 Bill Doyle made the unique trophy, Tū Kōtahi Aotearoa, in consultation with Te Wānanga o Raukawa master-carver Jason Hina for the winner of Super Rugby Aotearoa - and represents the coming together of the Blues, Chiefs, Hurricanes, Crusaders and Highlanders in the wake of the disruption and turmoil caused by Covid-19.

It was presented to the Crusaders on Sunday after they won an unprecedented fourth Super Rugby title in as many campaigns by defeating the Highlanders 32-22 in the penultimate round of Super Rugby Aotearoa. 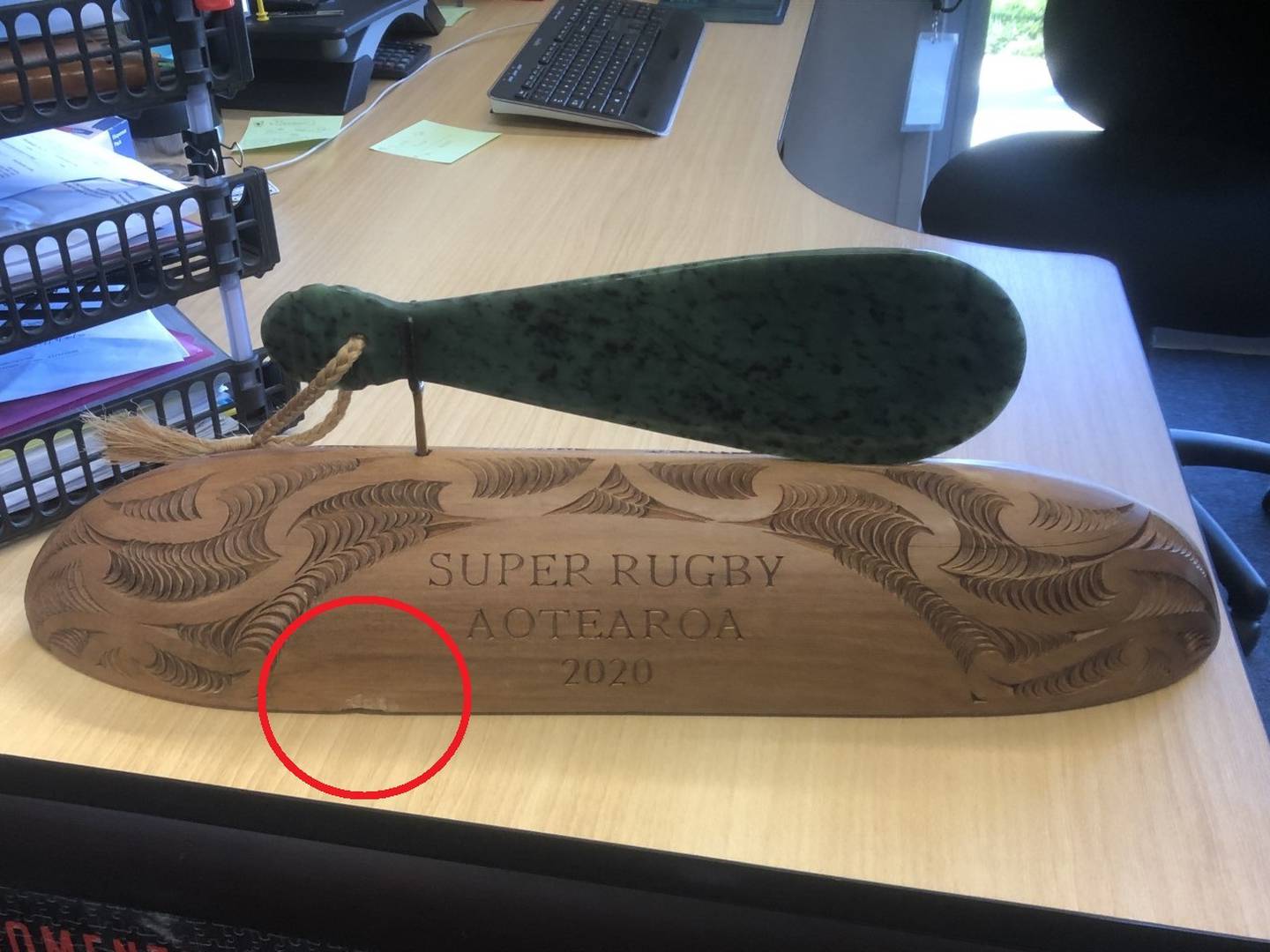 Photos of the trophy that surfaced on Tuesday showed chunks of wood missing from several areas of the base, while other images shows the precious pounamu stone missing from above the trophy.

When contacted by the Herald on Tuesday, Crusaders CEO Colin Mansbridge initially denied that the trophy had been damaged at all, before later saying it had suffered only "minor damage" in a transport case.

Mansbridge later issued a statement saying it had been dropped during celebrations and apologising for the damage.

On Thursday, Mansbridge denied Geena Doyle's claims it was used as a doorstep, but said the allegations it was found "by the rubbish" by the cleaners, may have been a misunderstanding.

He said the Pounamu was separated for safekeeping following post-game celebrations and the base of the trophy had been kept in the player's lounge at Rugby Park where cleaners often worked.

"To clarify, it was separated after it was dropped. One player had taken the Pounamu to ensure it didn't get broken, while the base was returned to the player's lounge to since be reunited." Mansbridge said.

Mansbridge said the team was apologetic over their treatment of the trophy and ensured they were working towards its full restoration. "The team are incredibly proud to win the title and to be awarded the trophy and we understand the significance and story behind it," he said.

"We realise we haven't treated it with the respect it deserves and we are sorry for that. We have reached out to understand the process and have connected with all the right people to repair it, and the spiritual stuff, as much as we can."

Earlier, Crusaders captain Codie Taylor apologised to an outraged fan on Instagram, saying "obviously it's disappointing this is the case.. never our intentions as this is probably the most special trophy we have been represented ... I apologise on behalf of the team and again appreciate the comment.. we aren't disrespectful, only human mate."