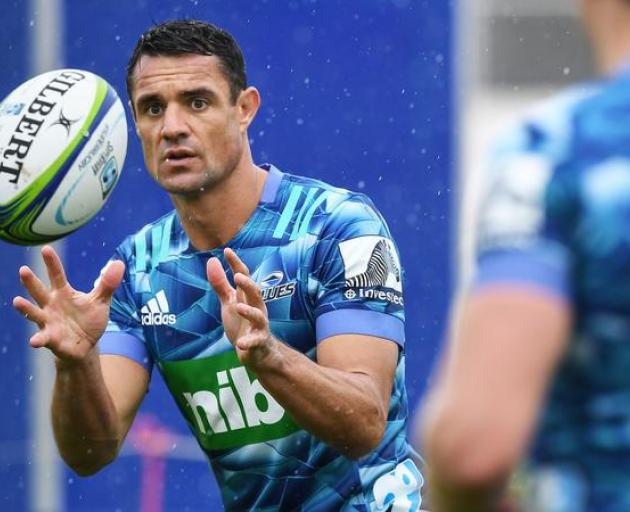 His body had other ideas.

Carter had been named on the bench for the Blues for Saturday's clash with the Hurricanes in Wellington, and was running through drills at training before preparing to speak with the media.

Then, Carter felt a niggle in his calf. Out came some ice, and Carter's planned media appearance was scrapped – as was his spot in the 23.

Less than an hour after the embargoed team release had proclaimed Carter's return, he was once again sidelined, with Matt Duffie coming into the 23, and Carter left to wait at least another week for his Blues debut.

"He's pulled up a bit tight – it's nothing too major but we want to make sure we don't risk anything with Dan, obviously he's working his way back with his conditioning," said Blues coach Leon MacDonald.

"He was due to take his place on the bench but we'll be starting with Matt Duffie on the bench instead. With calves, if you get on top of them early, it can take a couple of days to come right, but if you're a little bit late it can be 3-4 weeks – so it makes sense just to look after him.

"If he was 23 [years old], we probably would have said he's good to go, but we wanted to err on the side of caution."

Carter has taken a slow progression back to top-level rugby after signing with the Blues as an injury replacement last month. The 112-test All Black needed time to get back into top condition, having not played competitive rugby since the Japanese Top League final in December, and stepped back onto the field in club rugby last fortnight for Canterbury club Southbridge.

Having played 141 times for the Crusaders, Carter wasn't deemed fit to play his former side last weekend, and now his return has been put on hold for a further week.

Carter was initially set to be a utility option – MacDonald claiming he could cover first-five and fullback – with the Blues sticking with the trio of playmakers that took on the Crusaders, with Otere Black starting at 10, Harry Plummer remaining at 12, and Beauden Barrett set to match up with brother Jordie at fullback in his return to Wellington.

"We have resisted any significant change in the backs," says MacDonald.

"We are really pleased with how Harry Plummer is performing, while we believe Otere at first-five and Beauden at fullback is our best option at present as they combine well."

MacDonald has made several injury-enforced changes, with breakout star Hoskins Sotutu missing with a knee injury suffered against the Crusaders which the Blues are hopeful isn't serious, while James Parsons (concussion) and Blake Gibson are also ruled out, while a cautious approach is being taken with Karl Tu'inukuafe, who sits out on Saturday after his return last week.

Kurt Eklund starts at hooker after impressing off the bench last week, while Aaron Carroll will start at blindside flanker with Akira Ioane switching to No 8. Tony Lamborn replaces Blake Gibson on the bench, while young North Harbour hooker Luteru Tolai and the returning Gerard Cowley-Tuioti are also named in the reserves.

In the backs, Bay of Plenty standout Emoni Narawa moves into the starting lineup, replacing Caleb Clarke, who is attending his grandfather's tangi.

Blues' side to face the Hurricanes in Wellington: