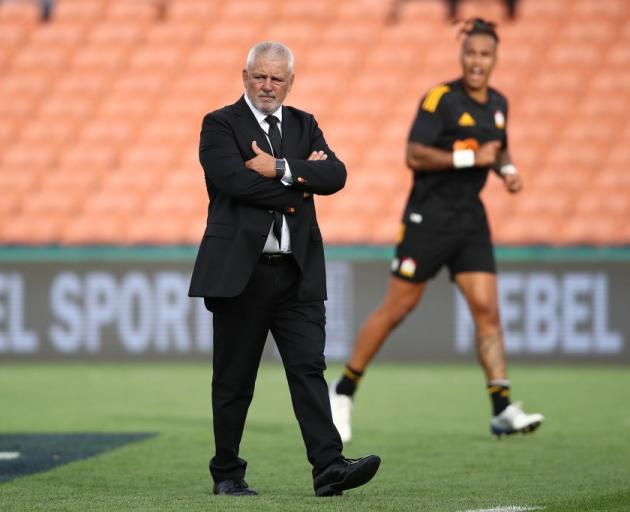 Warren Gatland. Photo: Getty Images
Chiefs coach Warren Gatland says New Zealand referees must improve to be recognised at the international stage after a recent spate of controversial refereeing calls made against his team.

After the franchise's seventh straight Super Rugby Aotearoa defeat against the Blues last week, Chiefs star Anton Lienert-Brown spoke out against crucial refereeing decisions, which in his view ended up making the difference in the game.

The Chiefs and All Blacks midfielder was adamant No 8 Pita Gus Sowakula scored under a heap of bodies during a late surge for the line and was frustrated that referee Brendon Pickerill didn't opt to consult the TMO to check a possible match-winning try.

Gatland, who has received multiple apologies from the referees for wrong calls against his team this season, said he and his team want to move on from the situation, but also added that he hopes referees can benefit from the Chiefs' recent games.

"I've just got to think of the bigger picture," Gatland said. "Yeah there's some frustration but these guys haven't thrown in the towel and they continue to work hard. And if you do that, hopefully we're going to get the bounce of the ball - something's going to go our way."

Gatland didn't blame the referees for his side's poor run of form but did concede that the quality of refereeing in New Zealand hasn't quite been up to par of late, especially at the international level.

He said he hopes the recent drama involving his team helps all parties, including referees, improve.

"You've got a put a smile on your face and laugh about it. We're definitely learning and I spoke of the players learning from this situation but I think the referees will benefit from this as well.

"It's the closest thing you're going to get to test match rugby and yes, they're making some wrong calls in critical moments, but it couldn't be any better preparation for them to develop. We haven't had a lot of international recognition from our referees in recent years and I think that's got to be the plan - you want top New Zealand referees refereeing in big matches around the world and that hasn't been the case.

"I think they'll definitely learn from that and the feedback I'm getting from them is they're really disappointed with some of the decisions they've made and they're hoping to learn from that and be better. And that's no different to players and coaches in same situations when they make mistakes."

The former Wales head coach was also introspective about figuring out how the team could improve, but insisted they remained as motivated as ever to topple the top-of-the-table Crusaders this weekend.

"At the moment we're on the wrong side but that's rugby and that's professional sport," he said. "I've got to take that on the chin and I'm searching for ways and looking at myself and what things I can do better in the environment and how I can help the squad and team to improve.

"If we had been beaten by 30 or 40 points then you start looking at it for things to fix and get right ... I feel like there's a tight-knit group of players that are desperate to want to do well and play well for each other and there's some good men here. When you've got some good with very good characters, you're going to come through the other side. There's no doubt that this franchise is going to benefit from that in the future.

"There's definitely no lack of motivation playing against the Crusaders. Apart from if you live down that area, I think everyone is hoping they get knocked over on Saturday."