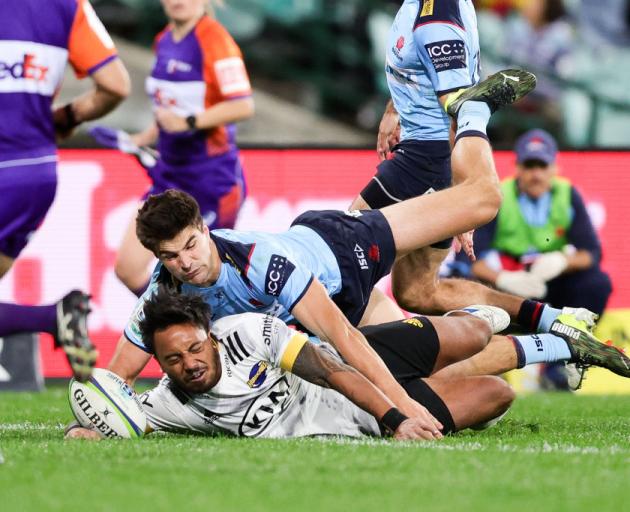 Pepesana Patafilo of the Hurricanes scores a try during round one of the Super Rugby Trans Tasman with the NSW Waratahs. Photo: Getty Images
New South Wales Waratahs scored seven tries in their Super Rugby Trans-Tasman opener with the Wellington Hurricanes on Friday, but after crashing to a 64-48 loss coach Chris Whitaker believes a change in approach is required for the Sydney-based team.

The Waratahs have endured a wretched season so far, with Whitaker appointed in an interim capacity alongside Jason Gilmore after Rob Penney was fired following a run of five straight defeats in Super Rugby AU.

Despite the coaching change the losses have continued for a callow Waratahs squad, who finished bottom of the Super Rugby AU standings without a win in eight games ahead of losing their Trans-Tasman opener at Sydney Cricket Ground.

"In the Sydney market everyone wants to see attacking rugby, but I think the mindset needs to change and that's what we're working on now," said Whitaker.

"It's not going to happen overnight so that's what we've got to work on."

Whitaker was critical of a defence that conceded 10 tries in a game that featured the fifth highest combined points total in Super Rugby history.

Julian Savea opened the scoring for the Hurricanes in the third minute while Jordie Barrett notched up a total of 17 points for the New Zealanders.

"It's tough isn't it?" said Whitaker.

"As we said in the sheds: How do you score 48 points and lose the game? Just too many soft tries.

"We knew that they've got plenty of X factor, they're big ball carriers, but too many soft tries.

"Just not acceptable and I think there's probably three or four tries there, which individuals need to put their hands up and say: not good enough."