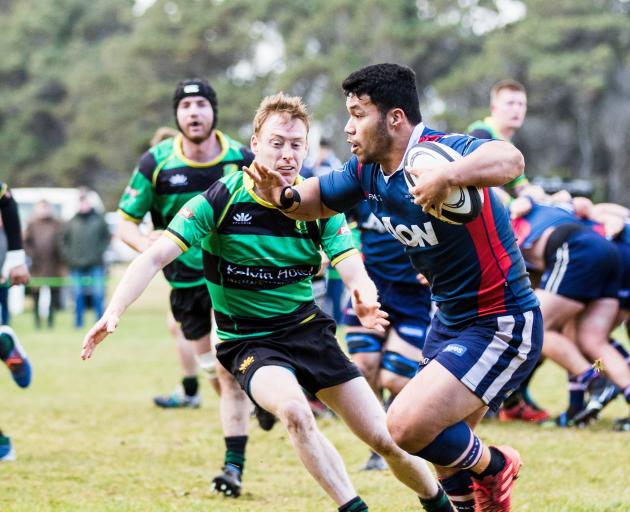 Woodlands midfield back Ray Nu’u, who is turning out for Green Island in the Dunedin competition this year, looks to go past Jeremy Boyle, of Marist in a club game last year. PHOTO: DEBBIE FAHEY
Seven premier grade teams will be in contention for the Galbraith Shield when the Southland club season kicks off tomorrow.

Rugby Southland had to continually revise the competition formats through the pre-season as clubs and teams worked through their player rosters and their suitable placement in the divisions.

Te Anau was keen to play in the top division but has been forced to drop out. That leaves reigning champion Woodlands, Star, Pirates Old Boys, Marist, Eastern Northern Barbarians, Blues and Midlands.

Midlands is the new side, moving up from division one.

Woodlands again has a strong player roster led by Marty McKenzie. It clocked up 80 points in winning last year’s final and looks the team to beat.

Pirates Old Boys will be relying heavily on the leadership of first five-eighth Greg Dyer and the wise heads of Craig Smith and Isaac Te Tamaki. Star loose forward Mark McHugh has retired and joined the club’s coaching group.

Two experienced players from the Eastern Northern Barbarians club have also moved on. Lachie McCall and James Mathieson will be missed but the Babarians have attracted four of the best Te Anau boys in Tom Scanlon, Kane Prentice, Levi Wairau and Jordan Maher to join the club this season.

The return of flanker Phil Halder and recruitment of halfback Jay Renton have boosted the confidence of the Marist club.

Midlands is doing well to step up to the top grade. Brothers Henry and Lachie Earland are two of their promising players in the backline.

After the initial round of seven weeks, the top six teams will move on to another five-week competition of round-robin games.

The semifinals will be on July 10 and the Galbraith Shield final the following week.

The seventh team will drop down to join the top five division one teams for the Ack Soper Shield competition.

They too will play five games before their semifinals.

In the opening day of the premier competition tomorrow, Midlands will take on Blues, Pirates Old Boys will host the Barbarians and Woodlands will kick off its defence with a match against Star.

Marist has the bye.

The division one competition begins tomorrow with 12 teams. After seven weeks, top five teams will proceed to the Ack Soper Shield competition while the other seven teams will be in a separate battle for the Gerald Dermody Shield.

The division two competition has 13 teams, split into two pools.

After seven weeks, the six top-ranked teams will contest the CJ Soper Trophy, while the Life Members Trophy is the prize for the next seven teams.