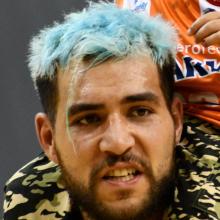 The Southland Sharks yesterday confirmed the return of their classy captain for the 2022 season.

A fan favourite in the South and nationally, Kelman-Poto will suit up for a third season in orange, following a standout campaign this year in which he averaged 18 points, eight rebounds and three assists per game and was named in the NBL’s all-star five.

“I want to get to that next level and the best place to do that is with Bevo [Sharks head coach Rob Beveridge] down in the Shark Tank,’’ he said.

‘‘I’ve just got to work even harder, and with the group of guys we’re putting together just grind every day and all take it up another level.

‘‘Obviously we want to win a championship, so I’m really excited about next season to go and get it.’’

Being Auckland-based has made the past few months in lockdown challenging, and Kelman-Poto is busting to get to Invercargill to get to work.

“I actually enjoyed the family time, and relaxed, but I did miss basketball, and it’s different training with other people than by yourself.

‘‘I just concentrated on cardio — we have a big rugby ground next to our house so I was able to go there every day and do cardio and resistance training. I actually lost a few kilos over lockdown but now everything has opened up, I’ve put them back on again so I’m really ready to get back to basketball.”

Kelman-Poto will travel south with his family early next month to limit the likelihood of further disruption to his pre-season training schedule.

As well as leading the team on the court, he will do some development work with Southland Basketball.

Beveridge knows what a coup it is for the Sharks to again secure the services of the standout forward.

“Having an incredible 2021 season, where Dom was voted as our MVP, there were many clubs chasing his signature,’’ Beveridge said.

‘‘It is great that Dom made the decision to re-sign with Southland. His versatility and uncanny scoring ability will again make him an integral part of our club for 2022.”

The Sharks will open the Sal’s NBL at Stadium Southland on April 9 against the Taranaki Airs.