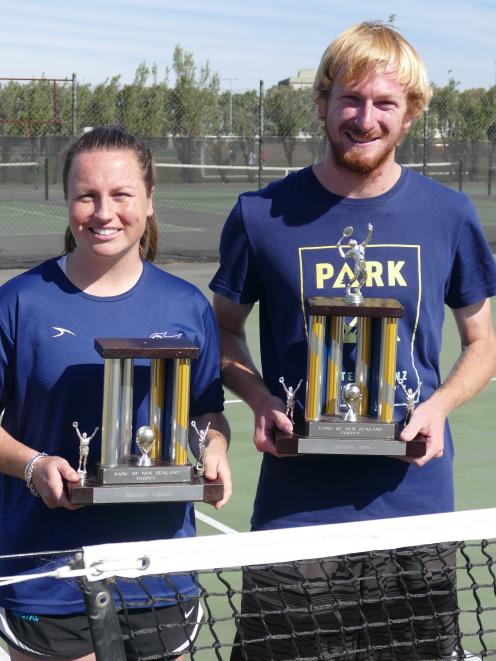 In a season in which Anderson's Bay finished well on top of the table, Balmacewen made sure the final would not be so easy as it pushed Anderson's Bay all the way.

The two women's singles matches were split as Ayesha Horley (Anderson's Bay) maintained her season-long run of form. She won the first set over Jessie Stevenson (Balmacewen) 6-3 before Stevenson had to retire due to injury.

Pippa Sherriff (Balmacewen), who has been steadily improving throughout the season, was efficient in defeating Angela Fitzgerald (Anderson's Bay) 6-3, 6-1.

In the top half of the men's singles, Ryan Eggers (Anderson's Bay) faced off against Henry Neas (Balmacewen).

Eggers was able to re-establish control and navigated his way to a 6-3 victory in the third set.

In the No 2 men's match-up, George Alexander (Anderson's Bay) overcame a slow start against Libby Scott (Balmacewen) to win 6-4, 6-0.

Scott had a 4-1 lead in the first set before Alexander went on a 11-game run to storm home for the victory.

The bottom half of the men's singles enabled Balmacewen to get right back into the tie as Jack Warner (Balmacewen) proved a step ahead of Mike Smith (Anderson's Bay) as he won a close battle 6-4 7-6 (7-2) while Nick Cutfield (Balmacewen) was his usual steady self as he found a way past Anthony Mirfin (Anderson's Bay) 6-2, 6-3.

This left the tie evenly poised at 3-3 going into the doubles rubbers.

The women's doubles was dominated by Anderson's Bay as Horley and Fitzgerald showed their doubles experience to defeat Sherriff and Ilana Goosens (Balmacewen), who came in to replace the injured Stevenson.

This left Anderson's Bay needing one more win to wrap up the title and that came in the top men's doubles as Eggers teamed up with Gavin Mockford (Anderson's Bay) to defeat Warner and Neas 6-2, 6-2 in difficult conditions as the wind started to have an impact.

Scott and Cutfield were able to get a consolation win over Alexander and Smith in the bottom men's doubles as they came back from losing the first set 3-6 to win the second set 6-2 and match tie-break 11-9.

St Clair's impressive three-year reign as Otago interclub champion came to an end as Anderson's Bay won for the first time since 2014-15.

Eggers and Scott were named players of the year at the Otago tennis awards yesterday.