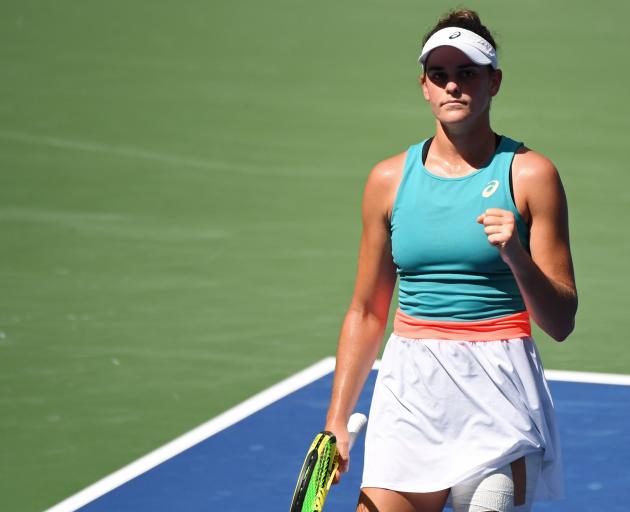 Jennifer Brady celebrates during her quarterfinal win this morning. Photo: Reuters
American upstart Jennifer Brady continued her surprising surge at the US Open.

She claimed a 6-3 6-2 victory over Kazakhstan's Yulia Putintseva to reach her first Grand Slam semifinal.

The 28th-seeded Brady, who has yet to drop a set at this year's US Open, used her massive forehand and impressive court coverage to deny Putintseva in her bid to become the first Kazakh woman to reach the final four of any major.

"I came out with nerves obviously ... so I just tried to treat it like all the other matches and pretend like it was a first-round match," said Brady.

"I was happy with the way I started and I think I was able to keep the momentum and build off that."

Brady, whose lead-up to the US Open included a maiden WTA title at Lexington, had all facets of her game clicking early as she broke twice on the Arthur Ashe Stadium court to race to a 4-0 lead before wrapping up the first set in 34 minutes.

Putintseva, seeded 23rd, had no answer in the second set as Brady broke three times for a 5-2 lead before securing the win on her first match point when she successfully challenged a service return that sailed long.

"I was waiting for the 'out' call," Brady said of the match point. "I was pretty confident that it was out but I was like I really hope it is out. I didn't want to play another point after that to be honest."

Brady (25) entered her latest match having never won a set off Putintseva in their two previous career meetings, which both came before the American's breakout season.

"Last couple of times I played her I got caught into playing her game," said Brady. "I don't think I'm better than her at just running and making balls so I definitely was a lot more aggressive today."

Up next for Brady will be the winner of another clash today between former champion Naomi Osaka, the fourth seed, and unseeded American Shelby Rogers.