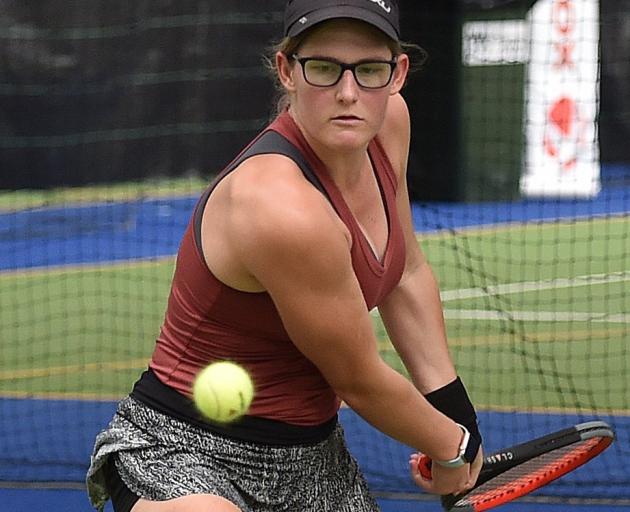 Peter Hartono inherited the men’s singles title from younger brother Thomas, who was unable to play in this year’s tournament.

On the women’s side, Sofia Shing, of Auckland, rekindled her own family connections with Otago tennis. Her father, Darryl, was an Otago representative for several seasons in the late 1980s and early 1990s.

Employing heavy top-spin ground strokes and good depth to keep her dangerous opponent away from the net, Shing was never threatened and conceded only two games in closing out the match.

Horley, the reigning Otago Open champion, set up her points well on serve, but lapses in concentration caused her to miss several easy put-aways.

The men’s final was a more engaging battle between Hartono and Ryan Eggers.

Both players had caused minor surprises on the way to the final.

Hartono upset top seed Sky Lovill, feeding off the pace of his opponent’s ground strokes and relying on his quick feet to stay with Lovill who, by his own admission, was short of his best.

Eggers had negotiated a tricky semifinal opponent in Oliver Petri, of Wellington, using his chip-and-slice tactics to frustrate Petri into errors.

The game plans of both finalists became clear as soon as the decider started, Hartono looking to come into net at every opportunity and Eggers testing Hartono’s timing with deft touches and spin variations.

Hartono consolidated an early break of Eggers’ serve to lead 5-4 in the first set.

Eggers had a chance to pull the break back at advantage receiver on Hartonos serve, but dumped a forehand passing shot into the net, allowing Hartono to serve it out.

Eggers had to start the second set well to get back into the match, but had his serve broken to love and faced an uphill battle from there.

His challenge started to falter as his reliance on his retrieval skills put greater demands on his legs after a long weekend of tennis.

Eggers found the mark on several occasions but, more often than not, he found Hartono in position to finish the point with an overhead.

In the women doubles final, the North Otago pairing of Belinda Hirst and Mackenzie Phillips put on a master class to prevail 6-2, 6-3 over Shing and Kaitlyn Wilkinson.

The men’s doubles was the most keenly fought final of the tournament.

Hartono partnered youngest brother Marco to the title in a 6-4, 7-5 result over Eggers and Gavin Mockford.

The runners-up had their chances to force a third set, but the Hartonos kept their discipline to win key points.