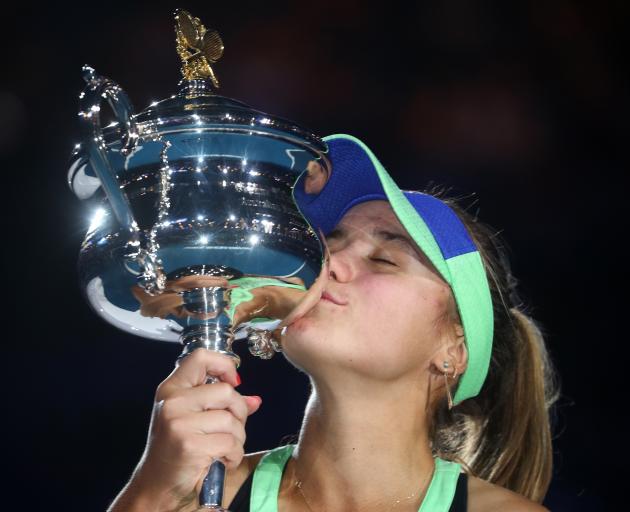 Sofia Kenin celebrates winning her first Grand Slam. Photo: Reuters
Sofia Kenin showed grit and combativeness on the way to her maiden Grand Slam title, as the 21-year-old American fought her way back from a set down to beat Spain's Garbine Muguruza in the Australian Open final.

Kenin may not have the strength or build of her Spanish opponent, but what she lacked in power she made up for in willpower as she took down double Grand Slam winner Muguruza 4-6 6-2 6-2 in Melbourne on Saturday.

Born in Moscow to Russian immigrant parents, the 14th seed became the youngest American since Serena Williams in 2002 to win a major, with Muguruza double faulting on Kenin's second match point to end an engrossing contest of over two hours.

"I just want to say my dream has officially come true. If you have a dream, go for it, because it can come true," Kenin said after lifting the Daphne Akhurst Memorial Cup.

"I feel like mental toughness has been a huge part. I've worked on that over the course of the years. It's just paying off."

On a wet and cold evening, Kenin and Muguruza produced a fitting and intense final under the closed roof of a packed Rod Laver Arena.

Muguruza had arrived in Melbourne suffering from a virus that forced her to quit the Hobart International, but the Spaniard was soon back to playing to her strength which helped her reach the top of the women's rankings in 2017. 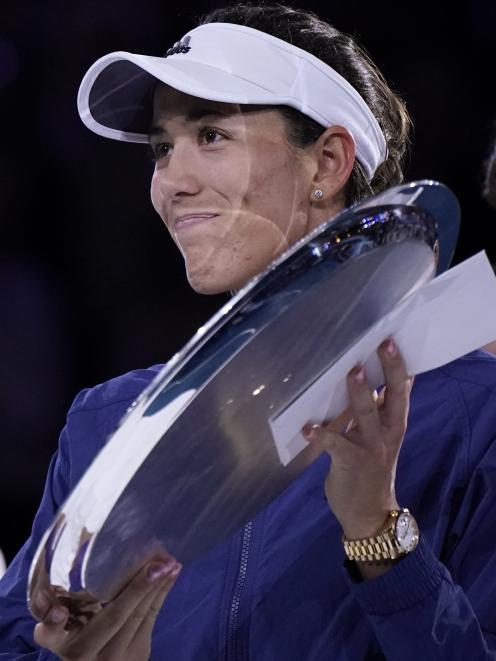 Some of the inconsistency that led to her slipping to 36th in the rankings last year resurfaced against Kenin, however, as the Spaniard blew hot and cold with her serve, getting 57% of first serves in while mixing nine aces with eight double faults.

The 26-year-old former Wimbledon and French Open winner, who was playing her fourth Grand Slam final, hit four winners more than her opponent but that came at the price of almost double the number of unforced errors.

Kenin, who had never advanced beyond the fourth round at a Grand Slam before this match, was definitely not short on confidence, however.

The American tied world number one Ash Barty for hard-court wins (38) in 2019 when she won three singles titles to reach a career-high world ranking of 12th.

She defeated Muguruza in their only previous career meeting, in Beijing last year, and came to Saturday's contest with a game plan, mixing deft drop shots with deep forehand groundstrokes to catch the Spaniard by surprise initially.

But Muguruza soon found her range and converted her third breakpoint in the third game to nose ahead in the opening set.

Kenin hung on, and then gave herself a dose of confidence by saving four breakpoints to hold the seventh game.

She was rewarded for her tenacity in the next game and got the break back, but the Spaniard came out firing on all cylinders to break Kenin again and took the opening set when her opponent missed the sideline with a forehand.

Kenin took the court in the second set with renewed vigour, and the power behind her shots visibly went up a notch. She levelled the match with two breaks of Muguruza's serve.

The intensity rose considerably in the deciding set, with Muguruza slapping her thigh to egg herself on while Kenin was almost reduced to tears of frustration at some of her shots and threw her racquet away a few times.

Down 0-40 in the fifth game and with her back to the wall, Kenin produced arguably her best tennis of the match. She painted the sidelines with three scorching winners and fired in an ace to hold serve for 3-2. She saved 10 out of the 12 breakpoints she faced.

The Spaniard's serving woes returned to haunt her as Kenin sealed the match with a second break, with the nervous Muguruza serving three double faults in the final game.

"I think I had to play better today because she came up with a great level," Muguruza said. "I think at the important moments I didn't find my shots."