Lakes the favourite for team event 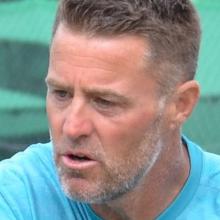 Alistair Hunt
The first round of the Southern Open Teams Event  takes place this weekend as Otago, Southern Lakes, North Otago and Southland line up in Queenstown.

Southern Lakes will once again go in as favourite as it has listed a strong side, led by New Zealand Davis Cup captain Alistair Hunt and former professionally ranked Perry Crockett and Lan Bale.

On the women’s side, the home team will be led by Ines Stephani and Emilia Price.Otago looks to be the strongest challenger, as it tries to finally edge Southern Lakes’ hold on the top spot.

Otago is led by recent Otago Indoor Open Champion Libby Scott and the runner-up Megan Rogers, and has depth on the men’s side to possibly cause an upset over Lakes. It will have Paddy Ou, Mitchell Sizemore, Ryan Eggers, Carlos Reid and, making his debut, Mat McCutcheon in its side.

Southland and North Otago will also provide tough matches in the weekend and it will be a good opportunity for Southland’s up and coming female top player Halle Faherty to continue her development.

On the Southland men’s side, Sky Lovill, who was ranked in the top 20 throughout his junior career in the United States, will be a player to watch.

Robin Jamieson and Rebecca Dellaway will lead the charge for North Otago.

The second division of the event takes place in two different venues. In Te Anau, Southland B take on Northern Southland, while Otago B, North Otago B and South Canterbury will compete in Oamaru.

Round two of the event takes place in February, when the overall champions will be decided.