Nadal too tough for Federer, Djokovic in trouble 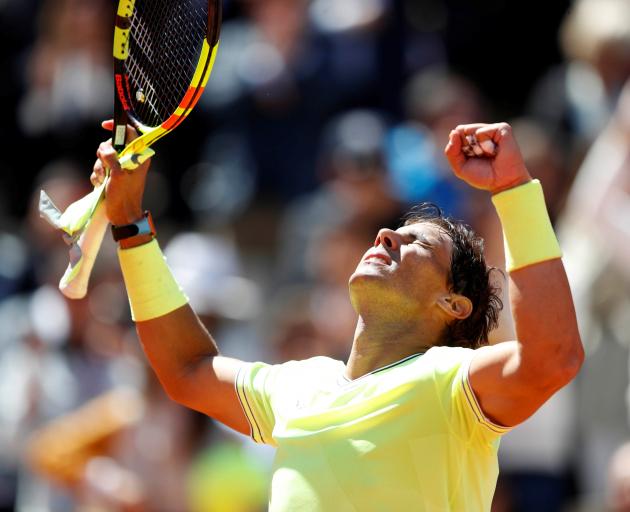 Rafael Nadal celebrates his straight-sets win over Roger Federer on Friday. Photo: Reuters
Before this French Open semi-final match-up it had been all about the dizzying numbers and statistics, but once great foes Roger Federer and Rafa Nadal stepped on to the Roland Garros centre court, all that mattered was both men's preternatural ability to strike a small yellow ball.

On Friday, it was Nadal's swinging, looping, whip-crack style which prevailed over Federer's finesse and near-perfect timing as he reached his 12th Roland Garros final 6-3 6-4 6-2 in Paris.

The Spaniard had never lost to Federer in their five previous French Open meetings, but hadn't beaten the Swiss in their last five matches overall, a run stretching back five years.

Something had to give.

But for all the anticipation, in the event it was Federer's winning streak that gave way - with no little brutality.

Simply put, the swirling, gusty winds inside Court Philippe Chatrier far better suited the Spaniard's style which has more safety built in, his heavily topspun shots clearing the net by some distance, and it resulted in his most one-sided Grand Slam triumph over Federer since beating him 6-1 6-3 6-0 here in 2008.

"I don't find any sparring partners... playing like Federer. There are no two people like Federer on this planet. Luckily, actually," Nadal said. "It's incredible, congratulations to Roger... incredible to play at that level aged 37.

"He's probably the best player in history, it's a great pleasure to play with him.

"Him and me know each other. We played many times against each other. But these are matches where we can always find this small plus, this additional shot.

"And when I play against Roger, I always expect the best from him."

The wind barely dropped all match with both players buffeted throughout, and rubbing grit from their eyes from time to time.

It hardly made for exceptional tennis, but both men pulled off breathtaking shots worthy of their status as two of the sport's greats.

"It is true that today was a little bit too much," Nadal said. "So difficult to control the situation and understand the things that were going on on court. But I think my personal feeling is I played a great match with those conditions." 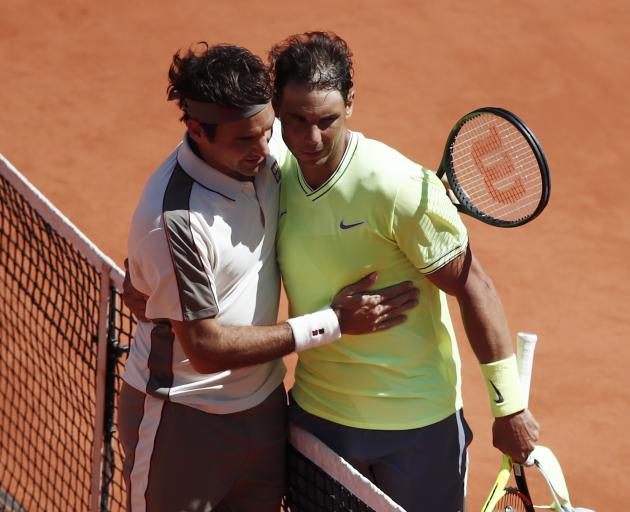 While the conditions were tough for both men, as Federer wistfully reflected, the gusts probably knocked the wind out of his game more than Nadal's.

"It was incredibly windy," Federer said. "So you're trying to see how much can you do or can you not do? Are you playing flatter or with more spin? Are you keeping the ball in play? Are you going for stuff? I think that was basically the story of the first set, more or less.

"Holding serve against the wind with Rafa's quality on the return is just really hard, you know? He barely misses any. And then when he's in the rally, he plays with great spin on the forehand, great sort of control on the backhand side.

"So it's just really hard to find holes, especially in the wind, if you're trying to hit through the ball, which is really difficult, actually."

He continued: "It was just crazy. No excuses, but it was crazy.

"I don't think I played poorly in the wind today. It's just it's tough on clay. You know, you've got to try to take on the half volleys, too, all that stuff. It just adds to the equation. He's the best clay court player, so I can accept that. It's not a problem."

Nadal has now won 24 of the pair's 39 meetings, and his triumph gives him a shot of moving closer to Federer's men's record of 20 Grand Slam titles. The Spaniard sits on 17. 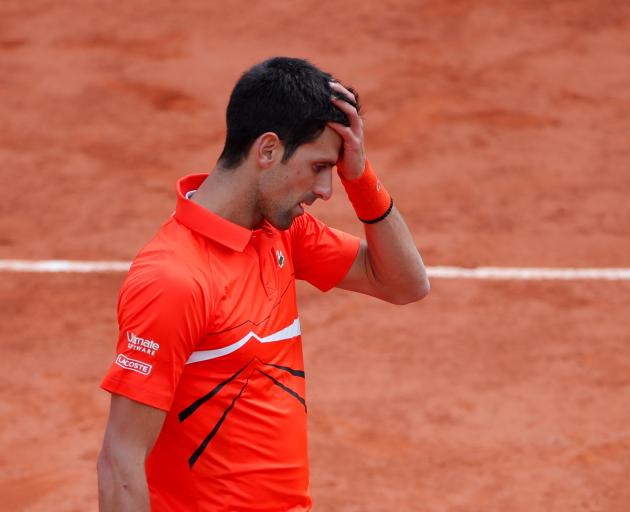 Novak Djokovic is bidding to become the first man in the professional era to twice hold the four big prizes in tennis simultaneously. Photo: Reuters

Meanwhile, world No 1 Novak Djokovic's hope of winning a fourth straight Grand Slam (and 16th in total) title was in jeopardy at the French Open on Friday when rain interrupted his semi-final against Austrian Dominic Thiem.

The 32-year-old Serb will return to court at midday on Saturday (local time) trailing 6-2 3-6 3-1 and with plenty of work to do if he is to get a crack at Nadal.

Top seed Djokovic is bidding to become the first man in the professional era to twice hold the four big prizes in tennis simultaneously, having also done so in 2016.

In gusty winds, Thiem's powerful groundstrokes helped him dominate the first set and Djokovic was in trouble early in the second when he fended off a break point.

He got the crucial break in the eighth game of the second set, however, when a Thiem forehand kissed the net cord and flew long and Djokovic levelled the match.

With dark clouds closing in Thiem broke serve with a huge forehand early in the third, shortly before the rain started again.

Play was eventually cancelled for the day about 50 minutes later despite no rain falling - leading to criticism from former French Open champion and pundit Jim Courier.

"This is going to sting," the American, commentating for ITV, said. "These conditions are very difficult for Novak, these are very advantageous for Dominic Thiem.

"(Rafael) Nadal and (Roger) Federer came ready to accept the conditions and so did Thiem. But Novak came ready to not like them. The happiest person right now would be Novak on his way back home."

Tournament director Guy Forget denied suggestions that Djokovic had left the grounds before play was postponed.

"I do not know who left first, but the two players were told exactly at the same time. They looked at each other and said 'OK'."